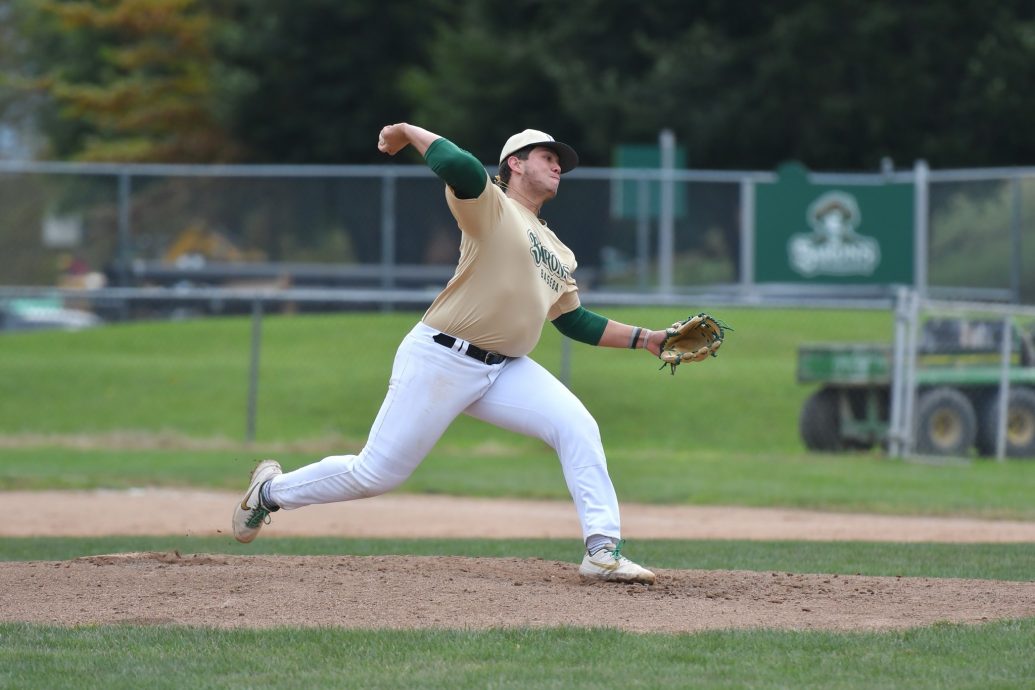 In an article on Franciscan University of Steubenville’s athletics page, Barons baseball coach Rick Carver said, “Jake is the ultimate competitor. Whenever we give him the ball, we know we have a chance to win no matter who we play.”

That quote refers to junior Jacob Watson, an experimental psychology major who calls Arlington, Texas, his home. He has been playing baseball with the Barons for three years, starting in the 2019 season.

In addition to covering first base, Watson is the team’s ace: its best starting pitcher. Watson has been a starter for as long as he has been with the Barons.

“I’m usually … throwing six to seven innings,” Watson said, “making sure I have a quality start and … keep the opponents under two runs.”

Watson is decorated, having been named the Presidents’ Athletic Conference (PAC) Pitcher of the Week and a PAC Honorable Mention for all of 2021. Also, Watson was recently recognized by the Collegiate Baseball Newspaper, a national magazine for coaches, as a player to watch for the 2022 season.

Watson said Barons baseball is different, in a good way, from any other teams he has played with in the past. He loves the culture being built by his teammates, all of whom come from different backgrounds.

Franciscan University’s baseball program went on hiatus from 2011 until 2019, when it was reformed under the leadership of coach Carver. As fresh recruits, Watson and his teammates at the time faced plenty of challenges when reviving the program.

“One of the biggest (challenges) was … talent-wise, like who are we going to play,” Watson said. “I give, really, a lot of credit to coach Carver and what he’s done in bringing in the recruits that he has. We have legitimately good ballplayers — not only just ballplayers but great men as well.”

Since then, Watson and his team have been on a journey, taking “physical, mental (and) spiritual” steps together, Watson said. The team has been “attacking” the weight room, working with nutrition and evolving in the faith life.

“We had some decent success last year,” Watson said. “We were able to make it to the conference tournament our first full year after (the pandemic). … That gave us a lot of confidence.”

Watson cites the team’s first trip to Florida, during his freshman year, as one of his favorite memories with the team. Another treasured memory for Watson is when they found out they qualified for the conference tournament.

Watson is a committee member of the Student Athlete Advisory Committee, which acts as a voice for student athletes. From that privileged viewpoint, Watson said Franciscan athletics is “trending in the right direction,” though he would like to see improvements.

“We student athletes, we work so hard training and doing all these things for the university that we love and that we support,” Watson said. “We want to give our best for the glory of God. … I feel like there can be more emphasis on Franciscan athletics outside of here, talking about it at Steubenville conferences, and making it more known on social media.”

Baseball and athletics are important to Watson, but faith holds the No. 1 spot in his life.

“I don’t think a lot of people realize how important it is to have a well-centered and well-balanced life built through faith,” Watson said. “Having a faith-centered life is the basis of being a man. I can’t see myself without faith in my life.”

Watson has been playing baseball since he was three years old, he said. Since then, he has played during every level of schooling on select teams and for his schools’ teams. Last summer, Watson played for the highly competitive New York Collegiate Baseball League (NYCBL).

Watson said the NYCBL was “by far one of the greatest experiences I’ve had in my life. I got to meet 24 other guys that were all there just for one purpose: to get better at baseball. … I still talk to all 24 of those guys today.”

In addition to playing on the baseball team, Watson also works as a sports medicine assistant at Franciscan’s athletic training room. He tapes ankles, does paperwork and provides heat pads or ice with the goal of serving his fellow athletes.

“Sports psychology is a field of psychology where you’re studying the mental health and mentality of athletes,” Watson said. “You got guys like football players suffering from CTE (repeated head trauma). How are those guys living in their everyday life? How are they responding to things?”

Watson hopes to enter a master’s degree or a doctorate degree program after graduating.

Regarding his other passions, Watson said he is a “video games enthusiast.” He also loves hiking, weightlifting and traveling. Also, Watson is bilingual, speaking Spanish, and he has twin sisters.

Watson called students to action to support the baseball team when their season begins this March. He said, simply, “Come support us this year!”