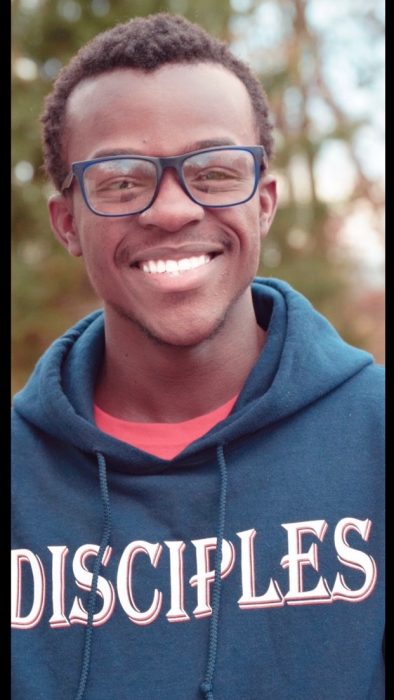 According to the Franciscan Athletics page online, when asked why he chose to attend Franciscan University of Steubenville, Gary Pierre said, “For the tennis team.”

Pierre is originally from the Delmas commune in Port-au-Prince, Haiti. He is one of two individuals from Haiti on the men’s tennis team.

“I actually came to (Franciscan) because of the tennis team,” Pierre said. “I met (the team) somewhere in Florida. They were there for spring break, and I saw them play. I loved the chemistry, and they invited me to come (to) visit, and I did. … And I loved it.”

At that time, when Pierre was in high school, he had been reaching out to several colleges he might want to attend. Scott Greve, head tennis coach at Franciscan, was the one who invited Pierre to meet the team in Florida.

Pierre is a senior captain on the tennis team, after being a junior captain last year. This role, Pierre said, is an opportunity to lead the team to become better men both on and off the courts.

Pierre said he enjoys the ability to grow both as an athlete and as a person on the team. The team members pray before they practice, Pierre said, and they help each other to grow in humility and discipline.

“I came from a very athletic background, very competitive,” Pierre said, “so my whole career was basically about winning. … There was nothing about (my character). So being on the tennis team and having Coach Scott — having the guys — (has been great).”

Pierre has been playing tennis since he was around 12 years old. He was introduced to tennis by his mentor Steven Kirby, who is also a tennis player.

“It was a hard decision because I moved here by myself,” Pierre said. “That was my first time being out there, being away from my family and my culture and everything that makes me (who I am). … After being here for almost 10 years now, I’ve kind of gotten used to it.”

Attending school online gave Pierre more time to practice tennis. The time spent practicing paid off, considering Pierre played for the International Tennis Federation. He was a junior nationally ranked No. 3, which required him to travel and play at international tournaments throughout the school year.

Pierre began attending Franciscan as a biology major at first. At the time, he was not Catholic but believed there is a God.

“My freshman year, the first three weeks, I was very confused,” Pierre said. “I saw people going to Mass … and I was not doing those things. I was like, what am I missing? I was curious — I was like, let me do some research and get to know what God is about.”

During that time of research, Pierre lived in St. Francis Hall. Some of his friends were in the Disciples of the Word household and they began to share their faith with Pierre.

Pierre joined the Disciples, who encouraged him to go deeper in his faith. This eventually led Pierre to the Rite of Christian Initiation of Adults; subsequently, he was confirmed in the spring semester of his freshman year.

“It was my own decision,” Pierre said. “At first I was inspired by the Disciples, but at the same time, it was my own calling. … My faith is very personal — it’s just me and God right now.”

During his sophomore year at Franciscan, Pierre switched majors from biology to international business, spurred on by his own international background and his passion for travel.

When asked what he does in his free time, Pierre jokingly said, “Do I have free time?” When he can afford it in his busy schedule, Pierre likes to play chess and pingpong and read.

The future is bright for Pierre as he prepares to graduate. He said he will soon begin looking for jobs and applying for a master’s degree.

The men’s tennis team will officially begin in the spring semester, and Pierre is hopeful.

“Looking back to when I was becoming a freshman,” Pierre said, “you have this whole heavy weight on you to carry on with what the seniors left, and I was able to do that. And now, being a senior (and a captain) is like, how am I gonna go and leave the team? So, I’m looking forward to next semester — I think we’re really good right now.”

2021-11-12
Previous Post: Insights with Emily: Love, our strongest witness
Next Post: The reign of table tennis on campus