Athlete Spotlight: Billy Presume: ‘Love’ from Haiti to US 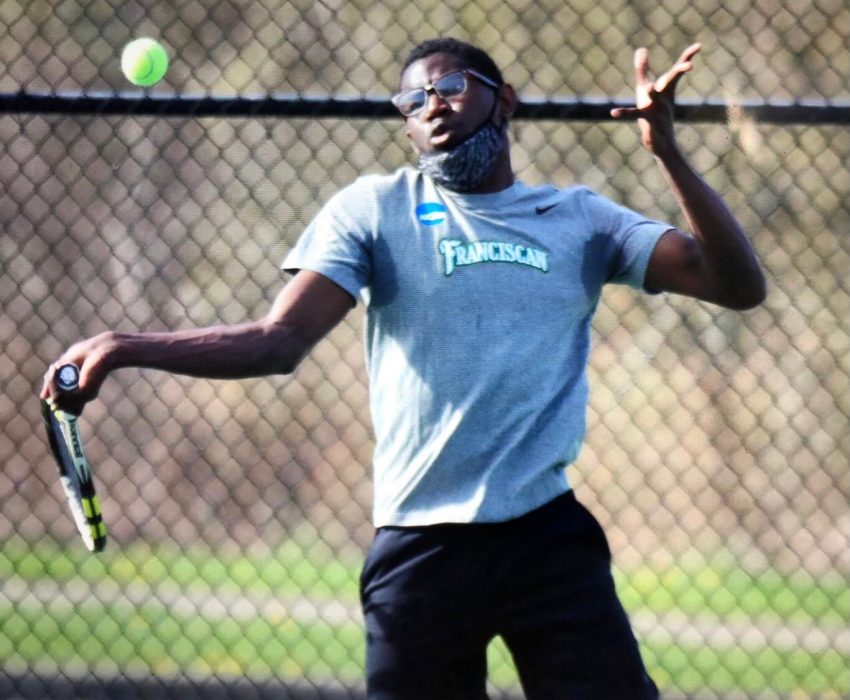 Franciscan University of Steubenville athletics have always been a staple of the Catholic faith in the world of Division III college sports. This is exactly what drew one tennis player to Franciscan’s campus, so he could not only enjoy the sport he loved but have his faith incorporated into it as well.

Junior computer science major Billy Presume came to Franciscan from Plaisance, Haiti. Presume is the fourth of seven children and has been playing tennis for almost eight years.

Presume didn’t play tennis for any institutions before coming to Franciscan but did play for fun in tournaments for a while.

Presume first got into tennis back in Haiti, when a neighbor invited him over to play.

“It all goes back to the earthquake — the earthquake is what set everything into motion and is also the reason I am here today,” said Presume. “So, after the earthquake I met this guy, he had an institution. He was teaching them to play tennis and I was his neighbor. He invited me to play, and that’s how I started. So, I was invited to play by a neighbor and got into this.”

When Presume came to Franciscan, he felt very blessed to be able to continue to play tennis.

“The fact that I absolutely love tennis, and that I had the opportunity to be on the team,” said Presume. “That I could be in college while still playing tennis sounded amazing to me.”

Presume says what he loves most about his team at Franciscan is the faith and being able to laugh along with his team.

“I love that they all have a wonderful sense of humor,” said Presume. “Different and unique to each of them, but yet everybody still gets along. It’s like they’re all very funny, and we can have fun while actually putting in the work to get better.”

“My favorite is when I hit a ridiculous ace, and even I wasn’t expecting it,” said Presume. “It’ll happen once or twice in each match, I’ll hit a ridiculous shot, and nobody knew where it came from and it cannot be reproduced by me. It comes out of nowhere. It’s like one of those ‘Yes, God exists’ kind of shots.”

COVID-19 has vastly impacted college athletics but Presume said that besides having to wear a mask and having matches canceled, it hasn’t greatly impacted his time playing tennis for Franciscan.

Presume said the only time he wanted to quit tennis was when he first started playing.

“I’ve never wanted to quit at Franciscan, but when I was younger, (during) my first year of tennis,” Presume said. “I hated losing, I still hate losing and I was losing, like, spectacularly. Like 6-0, 6-0, for most matches and I hated it, because I cannot stand losing. So, I was like ‘You know what, I’m done with this,’ but I never actually stopped, I just cried and said I would. But I never did and I’m glad I didn’t.”

The Franciscan community has been a blessing to Presume since he came to campus, and he said he loves every second of it.

“As small as Franciscan is, like in terms of size and scope, it is one of the biggest schools that I know of, and that’s not in terms of how big campus is or how many students it has,” said Presume. “It’s just how big of a heart everybody here has.”

“I don’t like to generalize,” said Presume, “so I’ll bring it down to (this): the vast majority of people here, they are so kind and genuine. You can almost get along with anybody, because you have something in common, which is the faith and recognition of your humanity, and that just makes it all the better. Might not be big in size, but it’s grandeur is ineffable.”