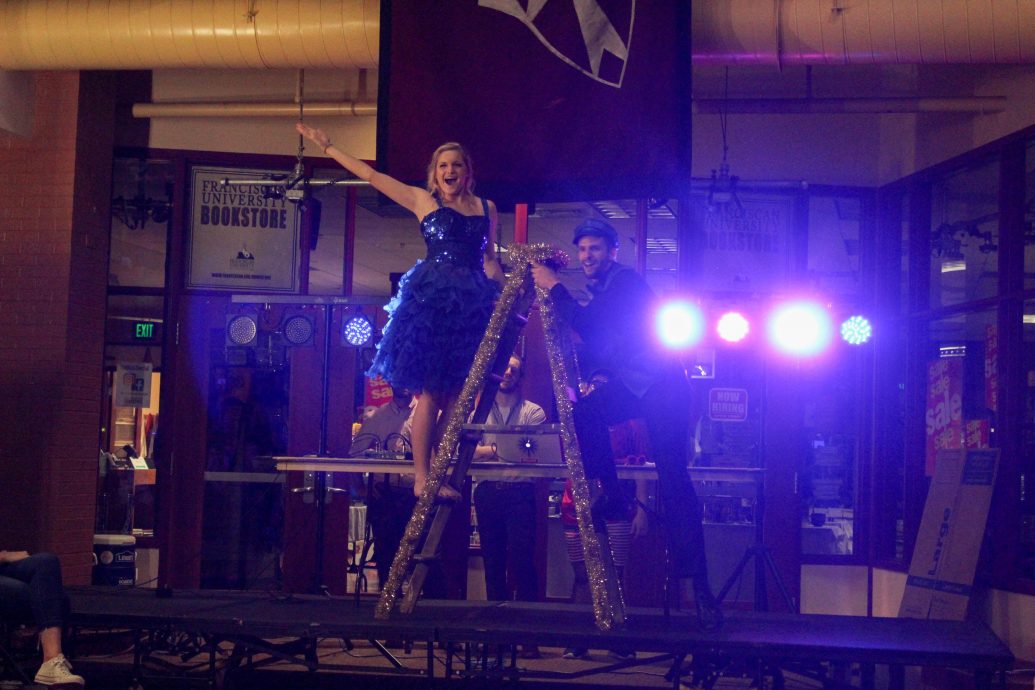 Desperate for a glimpse of the atrium floor, hundreds of students crammed into every available space in the J.C. Williams Center by 9 p.m. on Oct. 27, where performances were soon to begin at the Guardians of the Divine Will’s annual After Party and lip sync battle.

There was nowhere near enough seating for the number of students in the J.C. lining the stairs and railings, as energy, noise and anticipation ran higher and higher.

The performances finally began when a young man in a lion onesie appeared in the atrium to dance and lip sync to Toto’s classic “Africa,” and the crowd erupted in roars of applause.

The next act, performing Twenty One Pilot’s “Trees,” started with a single dancer decorated with fall leaves and branches. As the song progressed, dancers in matching black outfits joined in the performance, creating a flash mob effect that delighted the audience.

A highlight of the night was a recreation of High School Musical’s “Bop to the Top,” complete with bright blue outfits and a flashy gold ladder. The choreography brought screams, cheers and a standing ovation, and the Guardians member playing DJ for the night commented on the performance over the loudspeakers with the words, “That just transformed my life.”

Many acts opted for audience participation, dancing through the crowd or offering high fives to the front row seats. One act even pulled out a bowl of paint and invited spectators to paint stripes onto his white attire mid-song.

After a total of nine performances, the floor opened up for a dance party for the dozens that remained for the final hours of the night.

After the performances, freshman Madeleine Milstead said she enjoyed the “crazy” evening.

Mary North, another freshman, added, “The lip sync battle was the epitome of Franciscan. Only at this school is it acceptable to get in a onesie and sing to Africa.”