A nutcracker village and the masterminds behind it 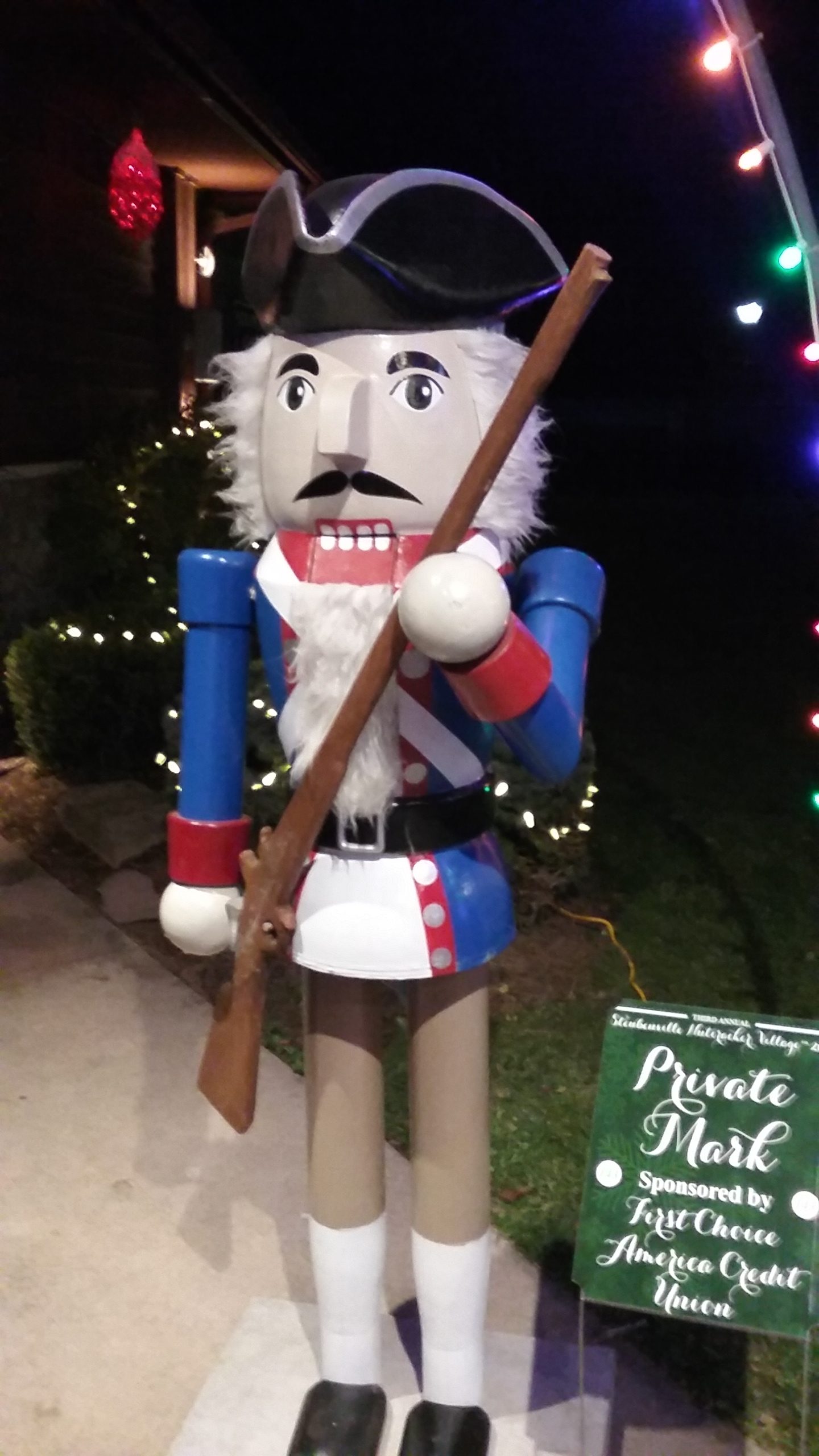 The Christmas spirit of Steubenville came alive this season as people once again flock to the impressive display of over 100 life-sized nutcrackers lining the sidewalks of Fort Steuben under a tunnel of Christmas lights.

The Nutcracker Village, a three-year tradition that adds magic and uniqueness to the decoration and attracts many visitors, is manifested in nearly 150 life-sized nutcrackers. The nutcrackers that line the walkways of Fort Steuben vary in sizes and themes, but always keep the same nutcracker feel to them. Most of the nutcrackers are sponsored by local businesses and organizations, each one giving a magical feel of the original nutcracker.

The nutcrackers range in a variety of themes – from a nutcracker St. Francis of Assisi to a nutcracker Colonial soldier to the traditional nutcracker.

Stutzman began working for Nelsons in January of 2014 as part of the woodworking department.

“It was basically one normal year of making picture frames and shrines and holy water fonts,” said Stutzman. “When we started doing nutcracker stuff, I somehow acquired the title, ‘Master Carver,’ because that was the easiest way to describe what I do with the nutcracker project.”

“Mark wanted, as a Christmas attraction, to have some kind of European-styled Advent market (similar) to what students might have seen in Gaming,” said Stutzman. “There was also the idea of bringing something unique to Steubenville.”

“There’s three of us working in the workshop,” said Stutzman. “We all kind of combined our heads and figured out how to make the first one, and got the system down, and learned how to work with new materials.”

“I just kind of took over, because it was sort of my area in the workshop,” said Stutzman.

Stutzman said the idea originally was for Nelson’s to build a hundred large nutcrackers that all local businesses and organizations could decorate on their own throughout the city.

“Sort of like a tourist attraction, to help the city pride,” said Stutzman.

Stutzman said a typical nutcracker takes six to eight hours to manufacture, except in the cases where a business would like a specific unique look to the nutcracker, then it is closer to 10-12 hours.

“Basically I carve them out of Styrofoam and assemble them and finish them, then I give them to Therese (Nelson) and she finishes them,” said Stutzman.

Stutzman said a typical nutcracker stands about 6 feet tall, including the hat.

“They’re all front orders from people, but normally one I get to have fun with,” said Stutzman.

With close to 150 nutcrackers now being displayed, Stutzman said they have no problem finding sponsorship for the nutcrackers.

Sponsors have ranged from universities like Franciscan to small businesses like dentist offices, most businesses being local.

“The first year, we just told people within our network, and there were 37 nutcrackers,” said Stutzman. “Once people heard, it wasn’t too hard to get sponsors.”

The popularity of the nutcrackers has grown so much that Nelson’s had to turn people away this year from sponsoring.

“We didn’t have to get the word out,” said Stutzman. “After the first year, it spread on its own.”

This is not the only contribution Nelson’s has made to Steubenville. In 2016, they opened the doors of Drosselmeyer’s Nutcracker Shoppe, a year-round Christmas-themed shop in the downtown area. Nelson’s is also looking to soon open the Steubenville Popcorn Company.

The latest storefront Nelson’s is currently working on opening is Leonardo’s Coffeehouse, a themed coffeehouse with paintings of Leonardo da Vinci’s decorating the walls.

“The whole vision of this is to bring culture back to the downtown area,” said Stutzman.

While there is not a set date for the opening of the coffeehouse, Nelson’s hopes to have it open within the year.

The Nutcracker Village is free and open to the public from now until Jan. 7. A variety of events will take place over the Christmas season, including performances of an original Nutcracker Village musical, “Wooden Hearts Follies,” and a Nutcracker Magic Parade on Dec. 9, according to their website.

2017-12-05
Previous Post: Project Saint Nicholas to give back to local community
Next Post: Students for Life initiatives use students’ talents to emphasize the pro-life movement