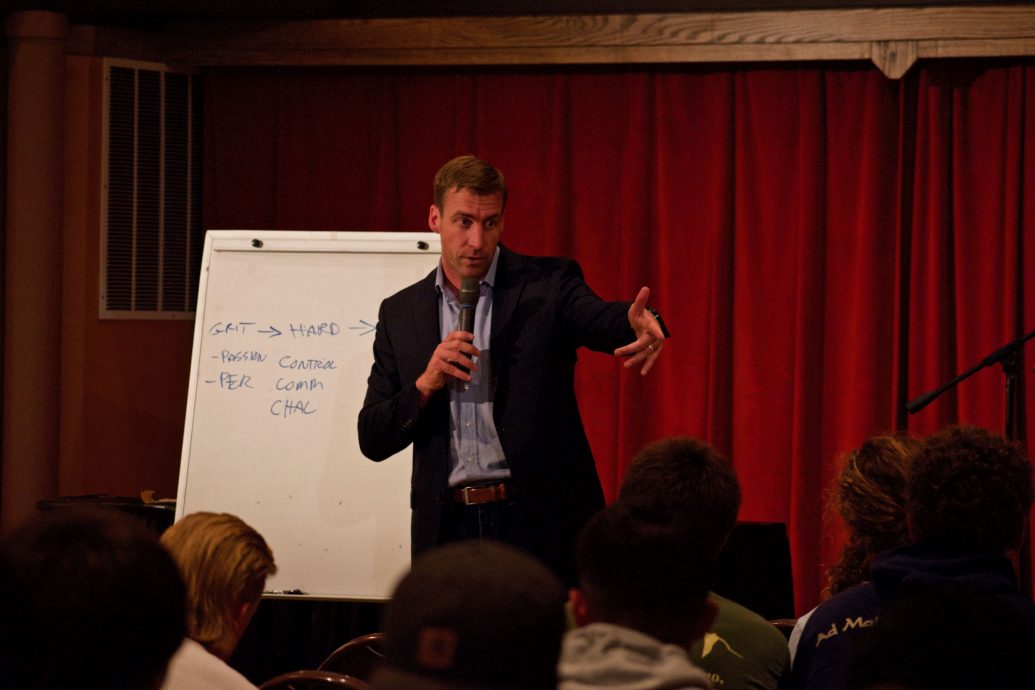 “Leadership comes down to a choice. … Anyone can be a leader,” said Lt. Cmdr. Samuel H. Blair, the speaker at the Master of Catholic Leadership talk Sept. 15 in the Gentile Gallery.

A Navy SEAL officer, leadership instructor at the United States Naval Academy and Franciscan University of Steubenville alumnus, Blair has held leadership roles all over the globe. His presentation on leadership drew a sizeable number of students, primarily men’s soccer team members, and Blair encouraged audience participation in Socratic discussion.

The first segment of the talk focused on the idea that anyone can become a leader, expounding upon what a leader is and why they matter. Blair said that leaders display virtues such as perseverance, confidence and integrity. Blair contrasted these virtues with bad leaders’ qualities: selfishness, pride and the tendency to manipulate others.

“Leadership is a moral activity,” Blair said. “(The dictators of history) were leading through manipulation. There’s a huge divide between leadership and manipulation. … If you’re a manipulator, you’re using your own gifts and talents for your own self-gain.”

A question from the audience spurred Blair to distinguish the different types of leadership. These include positional, people, productivity and pro-development leadership. Blair identified pinnacle leadership as the mastering of the other four types.

“If there are only a few pinnacle leaders (in the world), then as a society we’re not really grasping the idea of leadership in its purest form,” said Blair. “Power is neutral. You can use it for good; you can use it for bad.”

The second segment affirmed the necessity of hardiness and resilience to grow in leadership. Blair explained that these qualities are tied to a person’s outlook on life. One can have a fixed mindset, trapped in the past and afraid of failure, or an open mindset in which failure is an opportunity for growth.

“A lot of times, if we don’t have discipline, we make excuses for the things we don’t have control of because they’re hard even if we have the power to fix them. You get to choose your responses, your attitude,” said Blair.

Listeners had time to ask questions, and their queries ranged from how to bounce back from failures to how to cooperate with big personalities.

In attendance, sophomore Will Mooney praised the talk, saying, “A lot of people need to hear that. … It’s a much-needed thing in today’s society, understanding what a true leader is.”

The event was a joint venture between the Master of Catholic Leadership Program, the Center for Leadership and the Franciscan University Athletic Department, SAC.