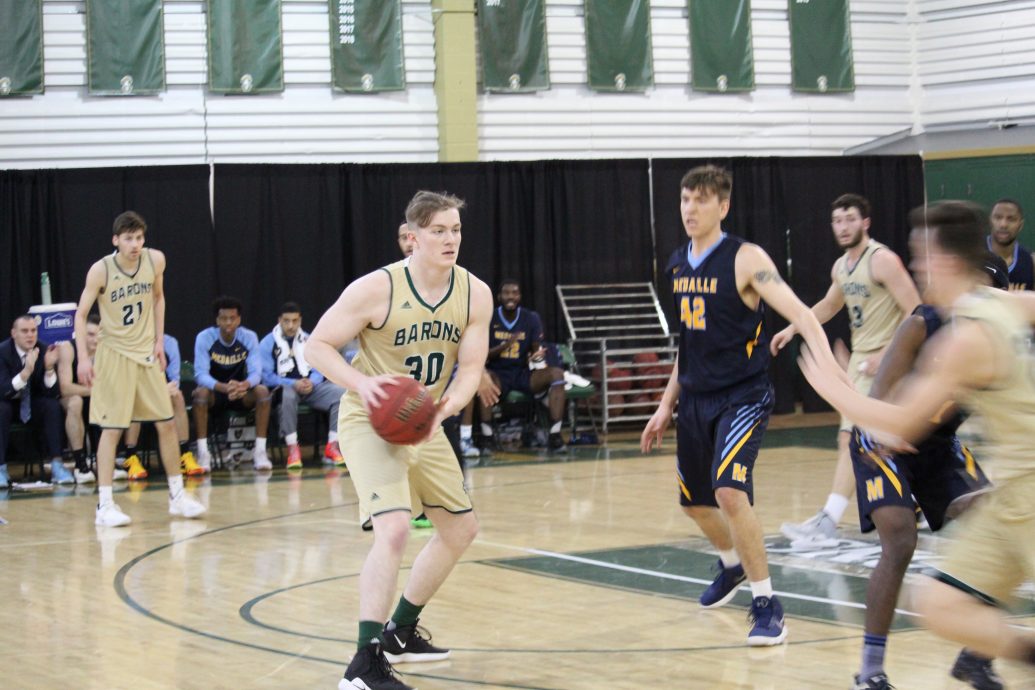 A minute into the game, the Medaille Mavericks scored their first point after a foul by junior guard John Noce, but the Barons quickly responded with a 3-pointer by sophomore guard Sean Hickey and a layup by junior forward Josh York, starting the game off with a strong 5-1 lead.

After a few minutes of wrestling for control of the ball, the Barons once again took the reins and extended their lead to 8-1 by five minutes into the half. Following a timeout by Medaille, the Mavericks began to gain on the Barons, bringing the score up to 10-5, until freshman forward Travis Lien widened the point gap with an and one layup that he converted at the line shortly after.

As the clock ticked, the Barons continued dominate, with help especially from York, Lien, Hickey and sophomore center Joe Vernau, bringing the score to 22-9 with five minutes left on the clock.

The Mavericks tried to shrink the point gap during the last five minutes of the half, but to no avail. The Barons maintained their 10 or more-point lead to the end of the half, ending on a high note with an impressive pull-up 3-pointer by junior forward Joe Schriner in the last 10 seconds, which brought the score to 31-18 Barons.

The Mavericks came back ready to fight in the second half, scoring 10 seconds into the half, but despite their best efforts, the Barons held onto their lead. A jumper followed by a free throw by senior forward Juwan Perkins brought the score to 40-22, and from thereon, the Barons maintained around a 15-point lead.

With four minutes left in the game, the lead began to shrink to around 10 points, though the Barons stayed on top at 57-48 with only four more minutes until victory. With three minutes remaining, the Mavericks quickly scored five points, with another layup a minute later, bringing the score to 57-55.

After a wake-up call from the Maverick offense, the Barons bit back with a Perkins layup at 38 seconds left in the game, which Medaille followed six seconds later with a free throw. A Perkins’ free throw 10 seconds later brought the score to 60-56, but Medaille, still fighting for the win which moments ago seemed impossible, followed that up with a 3-pointer, making the score 60-59.

With 10 seconds left, junior guard John Noce went 1 of 2 at the line, looking to end the game at 61-59, but with three seconds left, Medaille rushed down the floor and laid the ball up, pushing the game into overtime at 61-61.

The Mavericks came into overtime with a new resolve, and they quickly took the lead, with 67-63 on the board two minutes into overtime. After another layup by the Mavericks with a minute and a half remaining, the Barons made their comeback. Over the next minute, Noce made four free throws, closing the gap to 69-67 with 30 seconds left on the clock.

Trent followed up with a free throw, and then Hickey sunk two free throws of his own, tying and passing the Mavericks and bringing the score to 70-69 with 20 seconds remaining. With a second left, York scored a final free throw and then intentionally missed the second because of the clock reading only 1.8 seconds left.

After York fouled on the rebound of the intentional miss, Medaille had a chance to extend the game with an intentional miss of the second free throw but failed to hit the rim, resulting in a violation that ultimately sealed the game for the Barons. The final buzzer rang and the crowd exploded and rushed the court, celebrating the Barons’ intensely narrow victory. The final score was 71-69.

“Tonight was a special night,” said head coach Joe Wallace to the Athletics Department. “Not only honoring Hank Kuzma, but the atmosphere was unbelievable. Our students, the pep band, the local support – it was just great. … It was electric in here and honestly, we have one of the best Division III atmospheres’ in the country. I haven’t seen anything like it.”

The Barons will next play at home on Wednesday, Jan. 30 at 8 p.m. against Mt. Aloysius.