Talented student shares his work with others, presents gift to Pope Francis 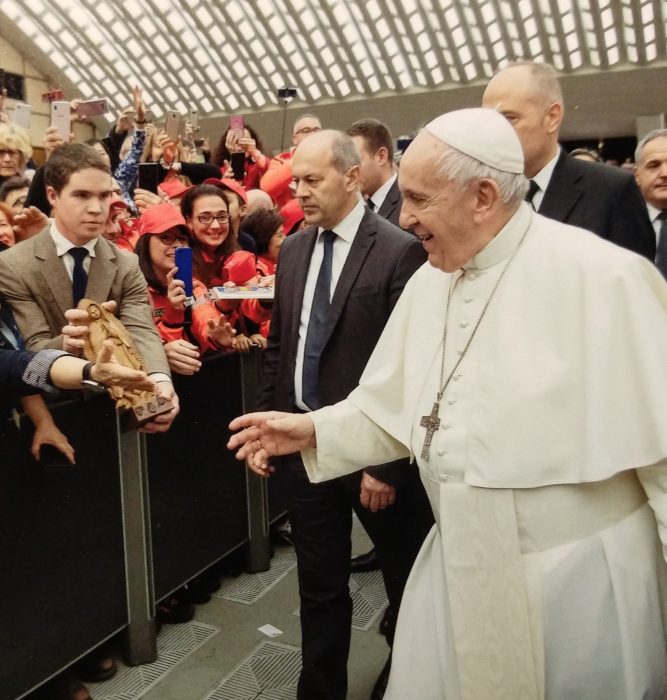 Everyone dreams of meeting their favorite celebrity someday, but few actually do. However, one student from Franciscan University of Steubenville decided to dream big and present a handmade gift to Pope Francis on his birthday.

In December, sophomore chemistry student William Dougherty travelled to Rome to give the pope a wood carving he had made of Our Lady of Guadalupe.

Dougherty is a talented artist who makes wood carvings with simple hand tools and a carving knife. Since starting wood carving when he was about 10 years old, he has made statues, doll furniture, miniature boats and much more, usually giving away his accomplishments as gifts.

“My boats got more and more complicated, more detailed,” said Dougherty. “(But) over time I moved away from boats … (and) started working on more religious stuff.”

Ever since the election of Francis in 2013, Dougherty has wanted to give a gift to the pope, who shares a birthday with Dougherty on December 17.

“I wanted to carve him something for a couple of different reasons,” said Dougherty. “I was really starting to get into wood carving more (at the time) and we had the same birthday and I thought he was pretty cool.”

This idea stayed in the back of his mind for several years until spring of 2019 when he decided to make it happen. Around Easter, Dougherty began a carving of our Lady of Guadalupe for the pope.

“I decided it should be our Lady of Guadalupe,” said Dougherty, “(because), for one thing, the pope is … from South America and I’ve always loved that image.”

Although he initially thought he would not be able to present his gift to the pope because of the rejections he received in response to his letters sent to the Vatican, Dougherty had a seminarian friend who made it work. His friend obtained tickets to a papal audience in December for Dougherty and his family.

Dougherty, having started the project in April, worked numerous hours to get it done in time for the audience, working about 20 hours on it over Thanksgiving break as he hit crunch time. Dougherty carved our Lady of Guadalupe from cherry wood milled on his family’s farm, adding even more personal meaning to the handmade gift.

“It made last semester pretty crazy,” Dougherty said. “It was pretty close to the wire but I managed to get it to where I was pretty happy with the final product. … It was record timing for me.”

The audience took place on Dec. 11, the day before the feast of Our Lady of Guadalupe, making Dougherty’s gift particularly fitting.

The crowning moment came when Dougherty was able to give his carving to the pope, who almost passed him by but stopped just in time to see the offering. Dougherty told the pope that they shared a birthday, and Francis thanked him for the gift before moving on.

“I ended up being very happy with how it all worked out,” Dougherty said.

Dougherty’s skills are not just a hobby for him, but a way for him to give a piece of himself to others. Now there is a statue made of wood from his own farm that is in the possession of the pontiff in Rome.

This carving for the pontiff was not his first big gift. Four years ago, Dougherty carved a 3-foot imitation of a 30-foot crucifixion relief carving situated in the motherhouse chapel of the Franciscan Sisters, TOR, of Penance of the Sorrowful Mother in Toronto, Ohio, near his family’s home. The project took about a year to complete and Dougherty presented it to the sisters when he finished it.

“They were extremely appreciative,” said Dougherty, “and they’ve taken it down to a new mission house that they have at Florida State University. … It kind of ties the mission house in with the motherhouse, which I think is neat.”

Dougherty has done work upon commission before, but he finds more meaning out of making his art as gifts for people he cares about.

“I really prefer giving it away. It’s more fulfilling to me personally to just give it as a gift and, in some sense, not reduce it to a certain price,” said Dougherty. “The most rewarding projects I have ever worked on are these two, the one for the (TOR) sisters and the one for the Holy Father.”