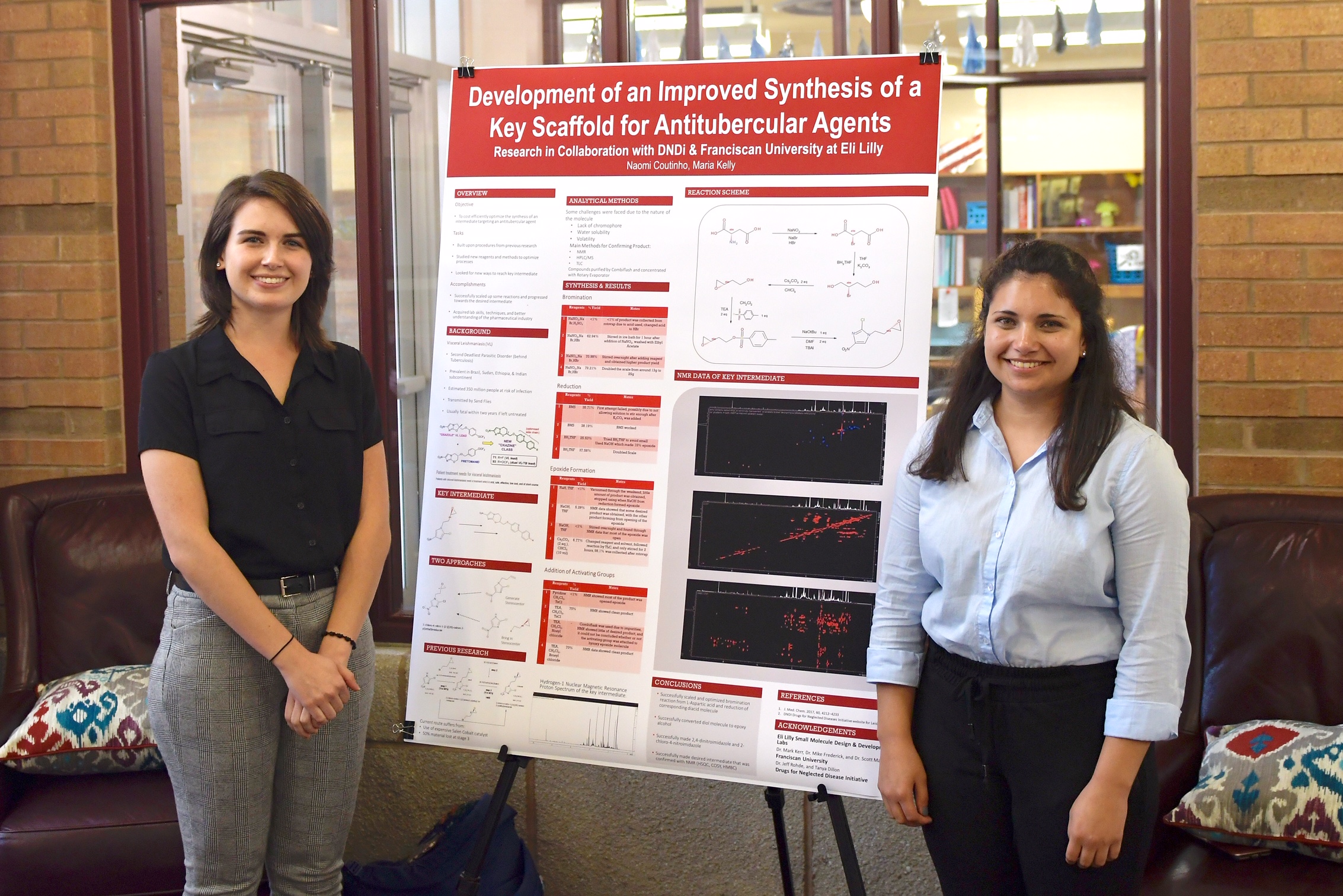 Students and faculty gathered at 2:30 p.m. on Oct. 5 in the Pugliese Auditorium at the annual Franciscan Institute for Science and Health (FISH) symposium to learn about summer research projects conducted by students both on campus as well as at other major research centers around the country.

The FISH symposium began with a short speech from Dr. Matthew Beckman, class of 1986 and 2018 recipient of the Fr. Dan Egan alumni award for his research contributions to health science. Beckman shared about his unique position as the first Franciscan alumnus to go into a career of research.

Emily Johnson, a junior engineering major, designed a new system for identifying mosquitoes. Previously, scientists were required to trap and individually count the tiny insects by hand, but Johnson’s method uses a microphone and circuit frequency pattern to identify individual mosquito whines. Each type of mosquito produces a slightly different whine, the frequencies of which vary from 200-1,000 Hz. After going through the microphone, the frequencies are run through a long circuit of operational amplifiers and virtual earth grounds to produce analyzable data.

Johnson studied with TABER research group at the start of its new long-term project to track disease in birds, including disease spread by mosquito bites. Johnson’s project represented a unique opportunity to participate in a fledgling branch of health science research. Johnson spent the first few weeks of her summer studying computer programming and sound frequency, enabling her to add both to her personal study and the broader body of scientific knowledge.

Maria Kelly and Naomi Coutinho, both junior chemistry majors, travelled to Indianapolis to research with the Drugs for Neglected Diseases initiative (DNDi) and develop a more cost-efficient method for the synthesis of a potential drug to treat parasitical leishmaniasis. After much trial, error and tweaking of their project, Kelly and Coutinho successfully synthesized 2-chloro-4-nitroimidazole at the very end of their internship. Kelly said the timing “was magical.”

After the large group presentations, the crowd moved upstairs to examine over a dozen professional posters of students who participated in research over the summer.

Kate Liljeburg, a sophomore experimental psychology student, explained her research on natural reward motivation in rats. According to Liljeburg, “every choice that you make (yields) a reward that you have to motivate for” and has a cost associated with that choice. Liljeburg noted that her female rat subjects were more likely to work for a reward, while the males were not.

Liljeburg studied under Dr. Stephen Sammut of the university’s psychology department and described her summer project as “definitely a really good experiment.”

Since it began in 2013, FISH has sent over 100 undergraduates across the country to conduct summer research projects such as these.