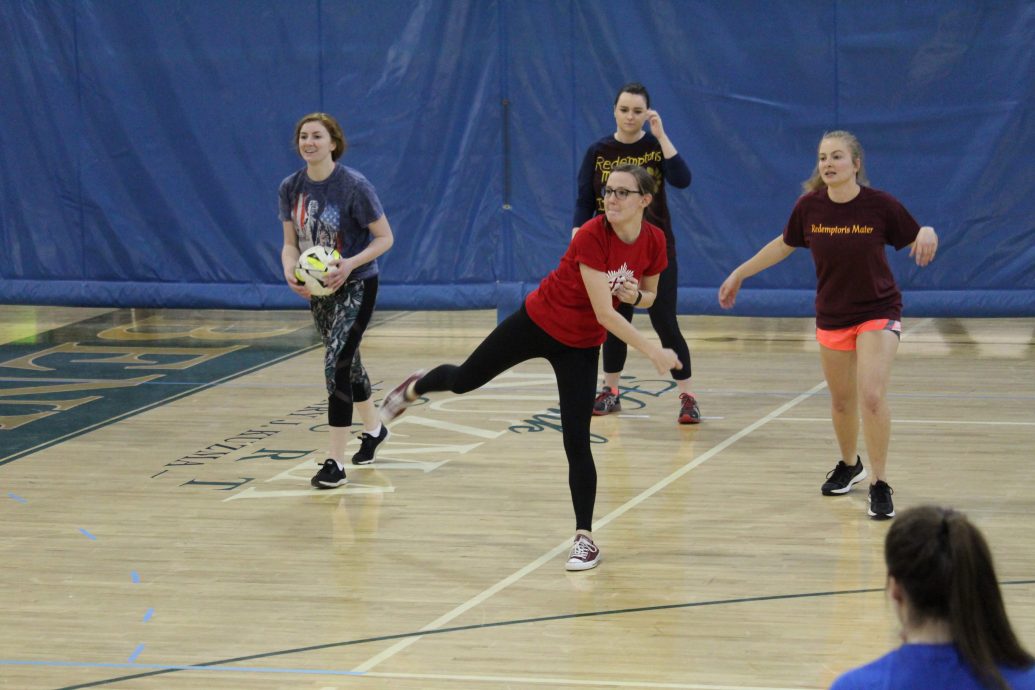 Cheers and blaring music accompanied a fierce fight at the Household Dodgeball Tournament, resulting in a surprising win for teams Stella Mariae and The Brotherhood for Greater Men in the Finnegan Fieldhouse at 7 p.m. on Sunday, Feb. 10.

The students waited anxiously for the night to begin, mingling with teammates and friends, while “The Final Countdown” by Europe blasted from the speakers. The prize on the line was steaks for the whole team.

The night started with the household Ad Majorem Dei Glorium (AMDG) spontaneously leading the gym in the National Anthem before an opening prayer. Bob Lesnefsky, director of household life, was the emcee for the event and kept the night alive with energizing music.

After the rules were explained, the teams went to their respective sides of the gym. The gym was sectioned into quadrants, half of the gym the “women’s side” and the other half the “men’s side,” with those sides split into side “A” or “B” giving a total of eight teams playing at once. Each match was played best two out of three games.

This year, 49 teams were registered, 28 for men’s teams and 21 for the women’s teams. Only 10 players were allowed on each team, and since some households were so large, they divided into two or three teams. Teams got creative with their names such as “Lambinators” for Love of the Lamb and “Carae Domination” for Carae Domini.

As the night went on, the gym slowly emptied with every team that lost, but the energy and excitement only grew. Much of the tension grew between households AMDG and In His Image as their multiple teams constantly versed each other. In the end, the finalists for the championships were Stella Mariae and Totus Tuus Maria for the women and AMDG and The Brotherhood for Greater Men, a team made by a group of upperclassmen not belonging to a household, for the men.

Totus Tuus Maria seemed strong in its stance during the game but eventually did fall to Stella Mariae.

Stella Mariae explained the team’s motivation for winning the night: the steaks. “That’s what sealed the deal. We had to come in with the mentality that we were going to eat steaks for Valentine’s Day,” said one of the members.

Members of The Brotherhood expressed their gratitude for the win. “I just got to do it for the Brotherhood,” said junior Ian Baldau, one of the members of the team and the last man standing in the match against AMDG. “It was probably the best moment of my life.”