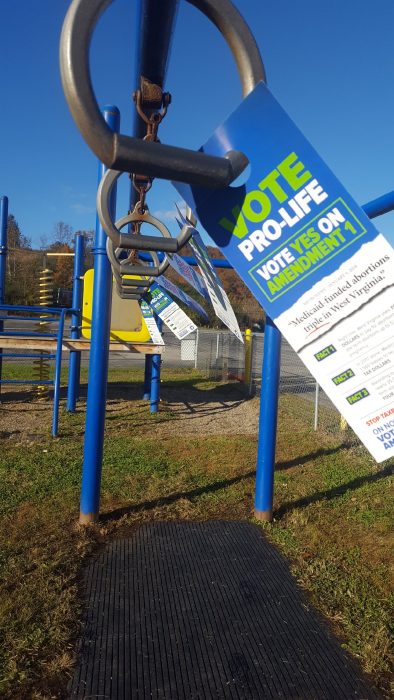 The group rejoiced on Election Day, Nov. 6, when they discovered that the pro-life amendment for which they advocated passed, effectively defunding elective abortions in the state of West Virginia.

After learning tips for how to effectively canvass, these passionate students spent their days going door-to-door, meeting people and discussing pro-life topics at stake in the upcoming election.

From 9 a.m. to 6 p.m. on Friday, Nov. 2, and Saturday, Nov. 3, students went out in teams to go to their mapped destinations. Each team consisted of approximately eight people and a designated driver, who planned efficient strategies to reach the most houses and handle unexpected situations, such as neighbors who could threaten to call the police on canvassers.

In each group, the driver would drop students off at a “walkbook,” a cluster of houses to which teams were assigned to canvass. Students each went to houses marked on their i360 Walk app, which pinpointed houses where people have previously voted pro-life.

The canvassers walked about nine miles per day, and they were constantly moving from location to location in their vans trying to spread the pro-life message and recording data for Susan B. Anthony List’s survey.

When the students talked to people at their houses, they discussed two main issues. They spoke to people about the nominally pro-life Sen. Joe Manchin and asked people to support his pro-life opponent Patrick Morrisey for Senate. The other issue they spoke on was the ballot initiative to the West Virginia Constitution called Amendment 1. If passed, this amendment would prohibit taxpayer-funded abortions.

Many men and women did not at first understand the purpose of the pro-life amendment. “I think one thing that was really important about the trip, to me, was to make people aware of politics and aware of what their tax money is going to,” said canvasser freshman Gerard Louder.

The group of students from Franciscan University traveled to 10,077 doors to share the pro-life message in West Virginia.

Throughout this time, the students were well provided for and greatly enjoyed their trip. The days were laced with fun challenges and the nights provided freedom to relax and spend quality time with friends.

Freshman Julia Turner said, “This trip was extremely powerful for me, just being able to influence other people in their voting … I would definitely do this again. The people who went are amazing, and I had the time of my life.”

Juliet Sidone, freshman, said, “I thought it was a great experience to be able to talk to people who had similar views, but also those who had different views. It was also pretty amazing to see that … I did have an impact in getting Amendment 1 passed.”

Sophomore Ketrina Clemons also accepted the challenges of encountering both pro-life and pro-choice individuals, saying, “I had to choose to love them instead of arguing with them … I can never repay (Susan B. Anthony List) for the memories I have and the lessons I learned along the way.”