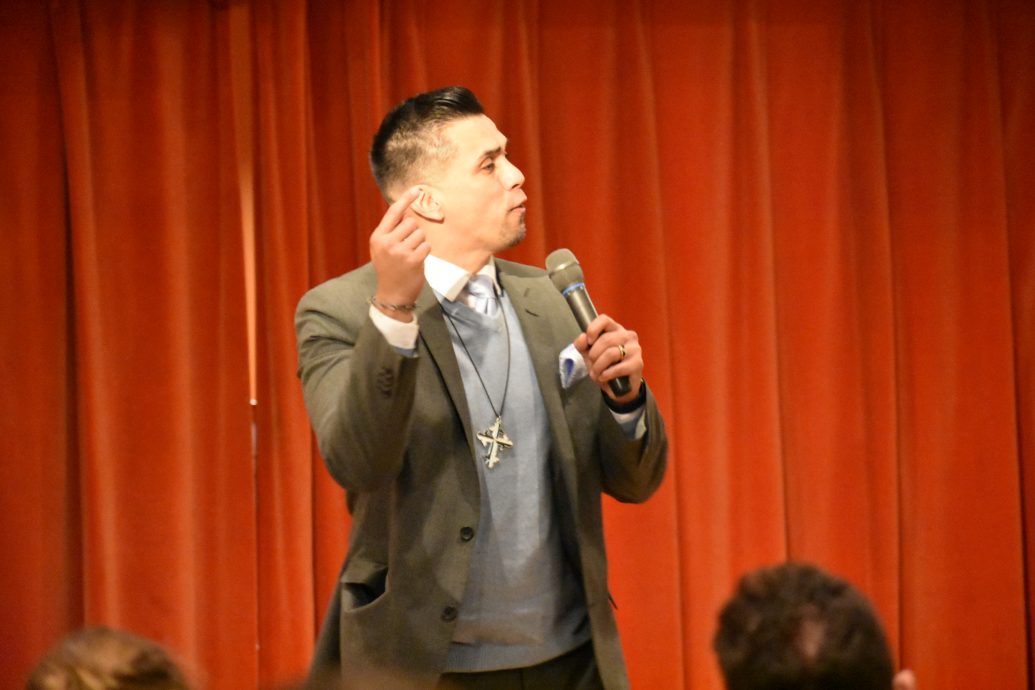 On Monday, Feb. 4, the Gentile Gallery of the J.C. Williams Center saw men sitting attentively, listening to and interacting with a talk on men’s spirituality.

As part of a three-night series of talks called “Made for More,” John Sablan and Deacon Harold Burke-Sivers spoke to men on Monday night on the need to be men after God’s own heart.

Speaking first, Sablan emphasized the true traits of Catholic masculinity. While the culture has an idea of masculinity, specifically mentioning “money, sex (and) power,” Sablan argued that the true image of what men need to be is different and difficult.

Sablan focused on the necessity for men to “cultivate a heart after God’s own heart” in their children. He exhorted the men to fight the scourge of physically and emotionally absent fatherhood in America today. Instead of absent fatherhood, Sablan impressed the need to be able to have a heart after God’s own heart – a living faith – so that there is something to be handed onto the child.

Sablan explained that an important aspect of having faith is obedience. Comparing the faith to sports, Sablan showed how the rules of the Church that are often ignored and despised are actually as enriching and necessary as the rules in any given sport.

Burke-Sivers, the second speaker, exhorted the men to live like King David, “the only king to not turn his back on God to follow another god.” Burke-Sivers encouraged the men to not look on their outward appearance to determine their worthiness but, like Samuel, to look into their hearts. He asked the men, “What does God see when he looks at you? Can he see his reflection in your heart?”

Encouraging the men to live out holy and pious lives, Burke-Sivers emphasized that “you can go to Mass every Sunday and still go to hell.” Impressing the insufficiency of mere attendance, he told the men that “sacraments are not magic.” Instead, he told them, “go out and live a Eucharistic faith in the world.”

Along with Defenders of Purity household, this event was also sponsored by Franciscan University and Household Life.

2019-03-16
Previous Post: YAF receives $2,000 for speaker fee
Next Post: Women equipped to become the battle partners for their future husbands at spirituality talk