Sisters of Life share stories of choosing to trust 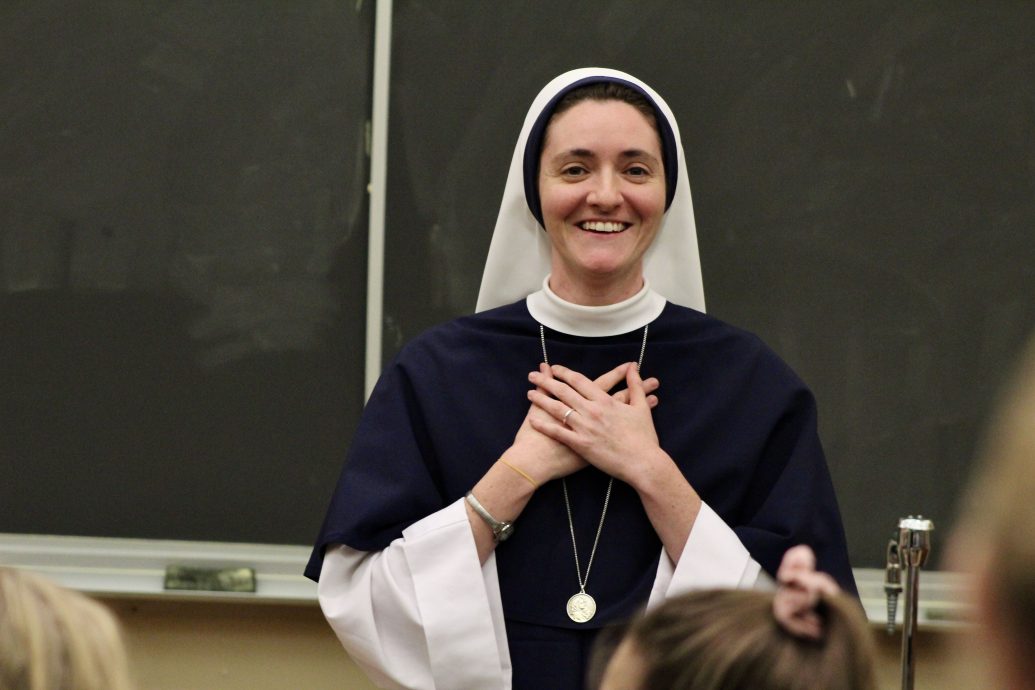 Students and sisters filled the Pugliese Auditorium to hear a talk on choosing trust by Sister Faustina Maria Pia and Sister Mary Catherine Nov. 21 at 7:30 p.m.

The Sisters of Life, whose order of consecrated religious takes a fourth vow to protect and enhance the sacredness of every human life, traveled from New York City to speak at an event hosted by Franciscan University of Steubenville’s Women’s Ministry.

Sister Faustina Maria Pia spoke on the particular courage that women are called to by God: “We need a courage to fall in love … to carry us through this culture and be won over,” she said. Quoting St. Joan of Arc, she reminded her audience that all are “born to do this.”

Sister Faustina Maria Pia noted three kinds of courage to which women are called. The first is the courage to be seen in one’s littleness, which is to let God love one for who one is.

Sister Faustina Maria Pia said that “when we start to love other people for who they are — not condoning bad behavior of course — … they have the freedom to grow… to live their true identity.” She noted that this is true for one’s relationship with God and encouraged her audience to let themselves be in the gaze of God.

The second courage is to love in one’s littleness, “out of a place of poverty.” She said that it’s when one feels unprepared but is called to share love that one is sharing one’s self as gift.

The third courage is to entrust one’s self to Jesus and let God love the parts of one’s self that one may not like.

She shared the story of a man who was diagnosed with cancer. With months to live, he addressed wounds from which he had been running away and asked for forgiveness. As his prayer changed from “Lord, heal my cancer” to “Lord, heal my heart,” his tumor shrunk and eventually disappeared.

Sister Faustina Maria Pia used this analogy to emphasize how Jesus heals us spiritually. She also noted that forgiveness frees us “to accept the gift of our life and to give it.”

Sister Mary Catherine then shared a testimony of reversion and a defining moment in her call to religious life. She encouraged women attending to not be afraid to put their trust in the one who wants to cherish and receive them.

“I didn’t become a sister because … I’m perfect but because … he (God) loves to build me up all the more,” she said.

Maria Lencki, junior, said the talk was especially encouraging for students in college, whose lives change every semester. She said, “Even if you don’t know where you are going … wherever (you’re) going, it is a good place.”