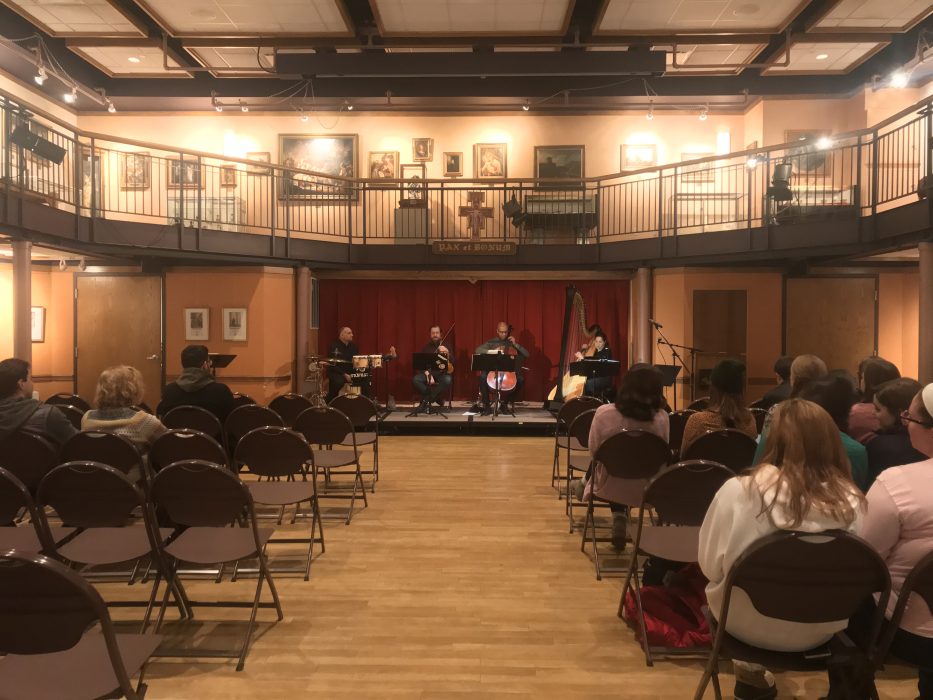 Catholic group Tango del Cielo, or “Tango from Heaven,” surprised students in the J.C. Williams Center with a performance featuring flamenco dancing and music on the harp and cello in the middle of an otherwise quiet Monday, March 4.

The troupe, which describes its performances as a place where “the passion of tango and flamenco meet the ethereal romance of the harp and strings,” was set up in the Gentile Gallery with a four-person band, a guest singer and a dancer.

The group consisted of Anna Maria Mendieta, harp; Matthew Szemela, violin; Joseph Herbert, cello; and Antonio Gomez, percussion. The four played multiple instrumental pieces together before being joined by guest singer Tiano Vas. Vas is an Argentinian performer who has toured South America and Europe as well as performed at World Youth Day.

Vas played on the acoustic guitar and sang Christian music; he encouraged the audience to sing along with him, emphasizing that they were singing not just a song but a prayer.

The event also featured flamenco dancer Suzanne Mendieta, who danced to multiple songs played by the band. She wore a sparkling gown and performed with a dramatic shawl and castanets. At one point, Szemela even danced with her while playing his violin.

Although the event was mentioned in the Student Life Bulletin, the lack of advertising around campus made the concert a surprise to most attendees, who were only drawn into the Gallery after Szemela and Vas processed around the J.C. while playing their instruments and encouraged students to come.

Anna Maria Mendieta emphasized that Tango Del Cielo wants to use its music to promote the Catholic faith. “We are dedicating our music to God,” she said. “We can evangelize through our music.”

She said that the members of the group are involved in liturgical music in their respective parishes and are connected to many Catholic organizations, which is how they heard about Franciscan University.

Franciscan is “such an important place,” said Anna Maria Mendieta. She explained that the group had played a concert in Zanesville, Ohio, the day before, and although the group members were to fly out the same day as their concert at Franciscan, they couldn’t resist stopping at the school. “We’d love to come back,” she added.

The group’s Catholic faith was well reflected throughout the performance. The opening number was the Ave Maria, and one of Vas’ original songs was about the Annunciation; his lyrics followed Mary around for the day and sang about how just another simple day for a simple young girl ended up changing the world.

Tango del Cielo seeks to communicate the beauty of the faith through the integration of traditional and contemporary music, Anna Maria Mendieta explained. The group’s music combines the genres of tango, flamenco, Spanish classical and Latin jazz to create a style that they advertise as “tradition with innovation, the serious with the playful.”

The Franciscan show, although smaller scale and a surprise to most, amazed attendees, who were gasping, taking videos and calling over friends throughout the performance. Many purchased the group’s CDs and got to meet the musicians afterwards.