Professor roleplays as Chesterton; speaks on beauty and Catholicism 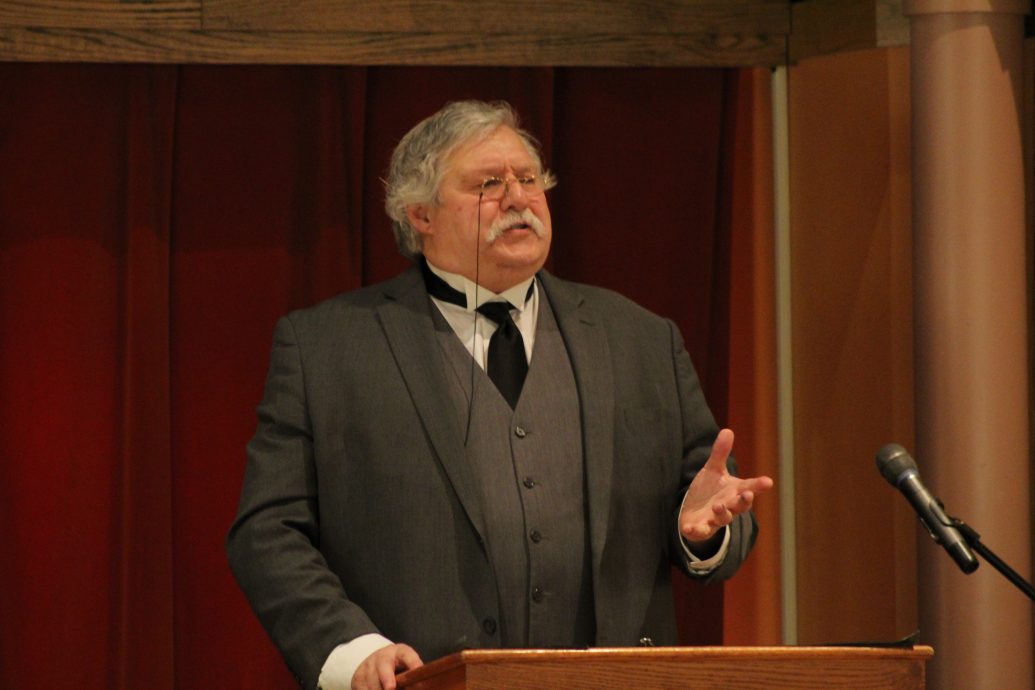 Over 50 attendees laughed when a theater professor entered the Gentile Gallery dressed as Catholic author G.K. Chesterton to speak on the question “Why is beauty essential to living a full, Catholic life?” Feb. 18 at 7 p.m.

John Walker, who holds a master of fine arts in acting, rummaged in “Chesterton’s” coat pockets for his talk notes, pulled out a train timetable and “a letter from other George Bernard Shaw” in the process, and began his talk after five minutes of making jokes.

“Children don’t need to be taught to appreciate beauty,” Walker said. “It is the same childish love and amazement and awe that awaits us in heaven. I can imagine God saying in the morning to the sun, as it comes up every day, ‘Do it again, do it again.’”

Walker said St. John Damascus was a strong advocate for beauty during the eighth-century iconoclasm.

“John of Damascus fought against (iconoclasts) bravely and said it was the Catholic tradition to use beauty to bring people into the Church. I suppose we have him to thank for Sainte-Chappelle, the rose window in Notre Dame or Michelangelo and the Sistine Chapel.”

After 30 minutes as Chesterton, Walker removed his suit jacket and vest, ruffled his hair and addressed the audience as himself.

“Find beauty out there in all the fine arts you can,” Walker said. “When you find one that really stops you, that makes you forget where you were going and what you were doing … stick with that for a little while. Let that change your life. Let beauty arrest you, speak to your soul and then send you on mission.”

During a question-and-answer session, Walker said that his interest in Chesterton was sparked by the Father Brown mysteries and led to acting as Chesterton for numerous projects at EWTN.

Walker said he initially wrote the beginning and end but had no middle for what became “The Golden Key.” And then, he came to Franciscan University of Steubenville as assistant professor of theater.

Once at the university, fellow professor Benjamin Wiker invited Walker to play Chesterton on his EWTN series “Saints and Scoundrels,” Walker said. While in studio, the producers asked to see his one-man play on Chesterton.

“In seven weeks I wrote seven drafts,” Walker said. “We filmed it, they got alongside it and then they wanted to make a Chesterton TV series. So now, we’re doing that but we’re also doing a ‘Twlight Zone’ kind of series about Catholics and faith struggles with new scripts and new actors.”

Freshman Olivia Russell said, “It was super funny, first of all. I had no idea what was happening when he first came in. I learned a lot. I don’t know anything about G.K. Chesterton, so it was really interesting to hear from someone who’s an author, their perspective on God.”

The event was hosted by the Franciscan University of Steubenville Chesterton Society.