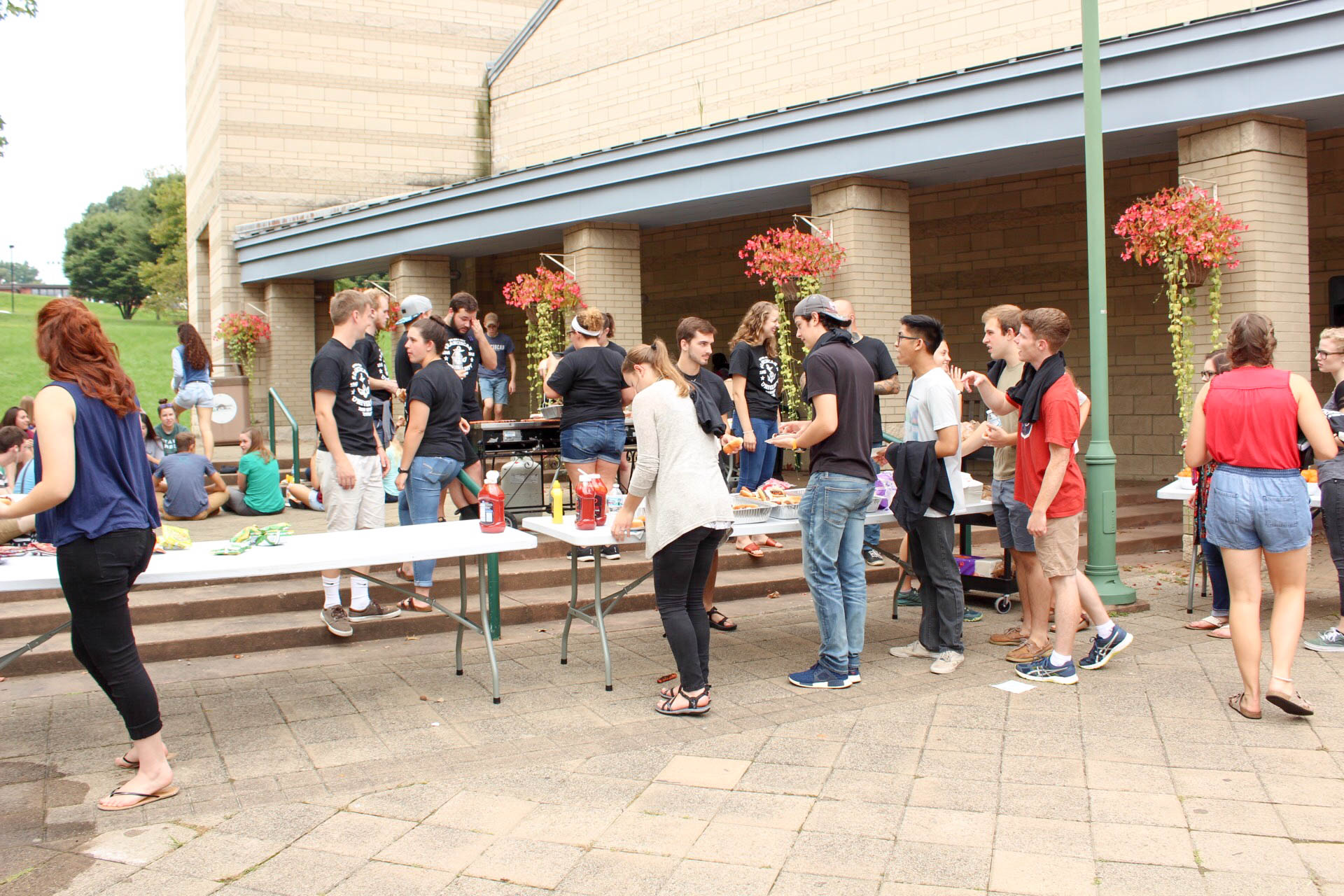 For the Franciscan University class of 2022, the past few weeks have been filled with firsts. In addition to being the first ones on campus to see a new hall, new chapel renovations and a record-breaking class size, they were also the attendees of the university’s first New Student Retreat.

The retreat is a new initiative at Franciscan, one that offers a fun social experience for freshmen and transfer students as they wrap up their first week of classes.

Bob Lesnefsky, assistant director of Household Life at the university, both planned and hosted the event. “(The idea) came out of some discussions from a group that I’m a part of on campus called the Spiritual Life Leadership Team,” said Lesnefsky. After planning began last spring, the team “gave me the lead on it.”

Lesnefsky explained that the major goal of the retreat was to build community among the new students. “There’s just never a time when you come in where you’re more lonely, uncertain about yourself,” he said about freshman year. Lack of direction and guidance can also lead to the formation of bad habits, he pointed out. “It’s easy to fall into some pitfalls.”

Lesnefsky said it was an obvious choice to try “to provide something that’s cool and that’s fruitful for them.”

After kicking off the event with a free lunch outside on the morning of Sept. 1, hundreds of new students filled the Finnegan Fieldhouse, not knowing what to expect of the day’s proceedings. What they found was a fun, relaxed atmosphere where they were soon competing for prizes, playing funny challenges and clapping along to Lesnefsky’s rapping. In addition to these games and icebreakers, the retreat also featured praise and worship and a talk on trusting God’s plan.

Lesnefsky emphasized that the retreat was completely different than orientation. “We tried to get the word out there: this is not orientation part two,” he said. “It’s not an information tidal wave. It’s a time to come together and grow closer to each other and to grow closer to the Lord.”

The theme for this year’s retreat was “Ask and Imagine,” which quoted Ephesians 3:20 to point out that God “is able to accomplish far more than all we ask or imagine.”

“Whatever you can imagine these next four years to be,” said Lesnesky, “God … wants to do more than that, exceed your hopes and your dreams and your expectations.”

The event’s speaker, Chris Padgett, touched upon this theme in his talk, “Free to Fail.” Padgett encouraged the students to trust in God and to not be afraid to make their mark at Franciscan. He pointed out that there are many amazing opportunities for personal growth at the university, but that students can easily set themselves up for failure if they do not get involved in the campus and community life.

“I though he hit it out of the park,” said Lesnefsky about Padgett’s speech. “It was a great mix of an encouragement and a challenge,” he said. “Don’t miss out. Don’t waste your four years here.”

After the retreat itself was over, new students either joined their small group leaders or visited other households for the celebration of their Lord’s Day commitments.

Lesnefsky specifically wanted an event where “every student experiences a little bit of household life,” he said. “The secret sauce of household is that it’s experiencing God through community.” This is helpful for freshman, who “just don’t have community yet.”

Overall, the event appeared to be a hit. Students left with smiles on their faces and popsicles in their hands, excited for that same day’s Festival of Praise and Rugby Under the Lights game, perfect conclusions to a weekend of fun and fellowship.

Among the freshmen that he’s spoken to since then, Lesnefsky says that the response has been “very positive.”

“I hope we continue doing it,” he said, confident that the message was effectively communicated.

“This is somehow, in some mysterious, mystical way, a part of God’s plan,” Lesnefsky said of each student’s presence at the school. “Don’t miss out on all the things that are laid out in a buffet of amazing grace before you.”