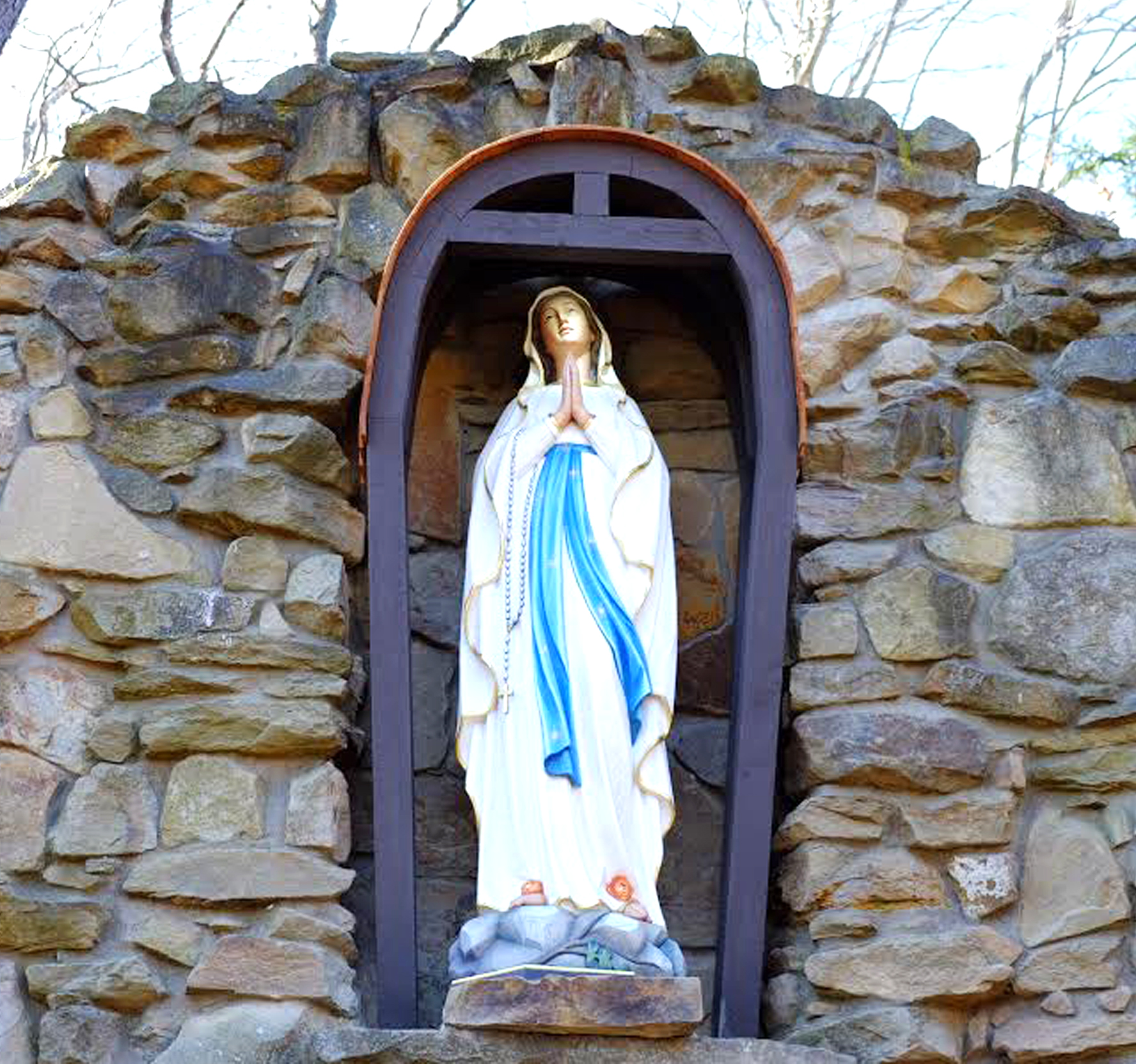 Students of Franciscan University frequent the Marian grotto on campus at regular intervals, but now many of them will be greeted by a new face.

Thanks to Chapel Ministries, the newest face around the grotto is that of Mary herself. After a four-month commissioning process, a new statue of Our Lady of Lourdes has arrived for veneration.

The Rev. Shawn Roberson, T.O.R., university chaplain, said the idea for the statue originated directly from his job description.

“Part of my job as university chaplain is to cultivate the faith life and the devotional life of our campus,” said Roberson. “It was a desire in my heart to honor her, and I felt like it was time for a renewal in that grotto area.”

“When Father (Roberson) came in to tell me about ordering the new statue he was visibly excited by the project,” said Rob Palladino, director of Chapel Ministries. “We both felt that this was something needed for the campus.”

The statue itself was ordered through Gerkens, a religious supplies distributor in Denver, but was commissioned in Italy.

Roberson said, “It was actually decided and discerned over the summer. We ordered it, and it was supposed to take three to five months time to get here with shipping.”

The frequency of Marian apparitions over the years necessitated for the chapel office a careful selection as to which statue in particular they would purchase. The choosing of Our Lady of Lourdes was inspired by the 10-day trip which Austria students routinely make to Lourdes.

“We particularly selected Our Lady of Lourdes because of Franciscan’s connection with Gaming,” said Roberson.

“The grotto is a special place,” said Roberson, asserting his belief that an improved grotto lends itself to increased intercession. “Students seek Mary’s guidance in their lives, and they go to the grotto to honor her there.”

Physical Plant Services was also busy at the news, in that the arch which shelters Our Lady had to be reconstructed to fit the increased size of the new statue.

Palladino credits Physical Plant with the “lion’s share of the work” with regard to the necessary construction in preparation for the statue’s installation.

Roberson said that the new statue improves on the aesthetic of the one which precedes it.

Palladino said that the grotto needed “a more traditional statue … better suited to the space.”

The reaction to the statue has been overwhelmingly positive, according to Roberson.

“I’ve heard a lot of great comments on it,” said Roberson. “Our community is very happy to turn its attention to the grotto.”

Palladino said the timing of the statue’s arrival on campus was ideal, “given that we are celebrating the 100-year anniversary of Fatima,” he said.

“For a campus where our faith and our spirituality is so important, I think honoring Our Lady in this way is particularly necessary,” said Roberson.

The friar understands that the importance of the Marian grotto is reflective of our faith focus here on campus. “It brings renewal,” said Roberson.

“I would definitely like to find a new place for it,” said Roberson, listing Marian Hall as one possible option.

Palladino said the entire project is thanks to the generosity of an unexpected benefactor, one who “came forward and offered us the funds to move on the project.”

Thanks to a joint effort between an anonymous donor, Chapel Ministries and Physical Plant, students, faculty and staff can turn their attention toward a new representation of Our Lady of Lourdes in the Marian grotto, to provide Mary the veneration which those on campus understand is due her.

2017-02-18
Previous Post: The man behind the camera
Next Post: New student club to increase awareness of human trafficking