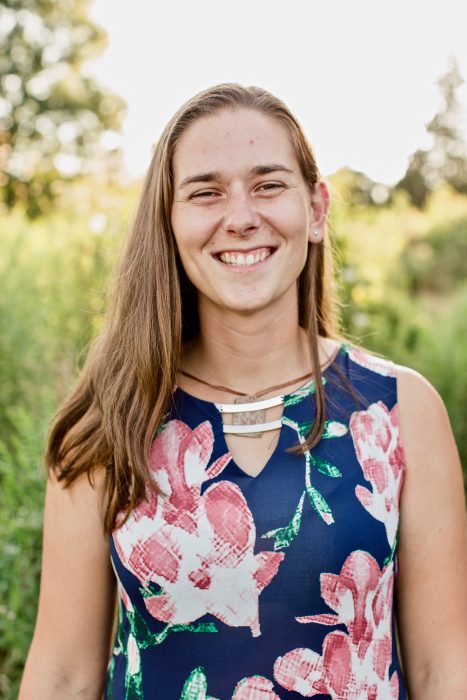 A new school year means a new job for and, more importantly, a new chapter in the faith journey of the new Marian Hall residence director (RD), Daniella Pillar.

Pillar is an alumna of Franciscan University of Steubenville, class of 2013, and holds a degree in theology and communication arts. She returns to her alma mater ready to share her life experience and journey of faith with the women of Marian Hall.

Pillar took on the job of Marian RD after working as a lifeguard at a waterpark, where she had specifically trained new lifeguards. She loved teaching people how to save lives, but she felt God calling her to something else. She eventually met up with a friend on campus who informed her about the open position.

“(She said,) ‘You should apply for this job!’ and I said, ‘That’s funny,’” said Pillar. But after opening her heart to God’s will, she packed her bags and moved into Marian. “I think this is the only thing I love more (than lifeguarding),” she said.

When finally settled into Marian, Pillar was anxious for the students’ arrival. “I just wanted the students to get here. … Just come already! I’m bored! I want something to do!” she said.

Her favorite thing about residence life is meeting the students and learning their stories. “It’s just been really a blessing just to meet people where they’re at and to just love them where they’re at,” she said.

Being an alumna helps Pillar connect with the students under her care. During her time as a student at Franciscan, Pillar loved to get involved in activities on campus, so she knows well how busy campus life can be.

As a sister of Carae Domini, she was household coordinator her senior year and partook in household council. She played on the softball team and participated in the Capture My Heart Retreat put on by Women’s Ministry. She also did her share of mission work, having gone on the Jamaica and San Diego mission trips.

Her love for mission work didn’t stop when she received her diploma. After college, Pillar joined the National Evangelization Team (NET) for a year. Traveling across the country, she ministered to teens and grew in her own prayer life through the fellowship of the NET team. “It gave me a place where people could hold me accountable and love me” and where her mission-team “brothers and sisters remind(ed) me that it’s good to have fun too,” she said.

Faith was always a big part of Pillar’s life. Growing up Catholic and the middle child of five, she went to Sunday Mass and occasionally attended charismatic conferences with her family.

Pillar’s mother was the force behind her family’s faith, which Pillar appreciated. “‘You’re coming with me! I don’t care what you want!’ She’s great like that,” she said, attempting to mimic her mom dragging the family to the conferences.

When on a weekend retreat, Pillar decided to give herself to the Lord for the first time, claiming her faith in a more personal way. “It became my own, and that threw me into having my own faith, which is kind of the beginning of me coming (to Franciscan),” she said.

Her parish youth group introduced Pillar to Steubenville Conferences. At her first conference experience, she slept inside a circus tent similar to where the talks were held. Aside from the talks, Pillar also heard about Franciscan.

“(They said,) ‘Yeah, there’s a college out there that actually cares about their faith.’ I was like, that’s cool! I want to go there,” she said.

Even after this experience, Pillar had doubts about this promised campus. “Eventually, we got to the point of ‘there’s no way there’s a place out there that actually exists like that,’” she said.

Pillar believed this until she finally had the opportunity in high school to set foot on campus when she went with a prayer group to a Festival of Praise. Her eyes were opened to the reality of the university’s passion for faith. “I was like, whoa, it’s real! This is a real school, and they actually do love their faith,” Pillar recalled.

Filled with faith and a willingness to love the students on campus, Pillar is ready for the new year and everything God has to offer to her and through her.

2019-09-16
Previous Post: Troupe promotes passion for musical theater on campus
Next Post: Austria Column: Travel will not change your life