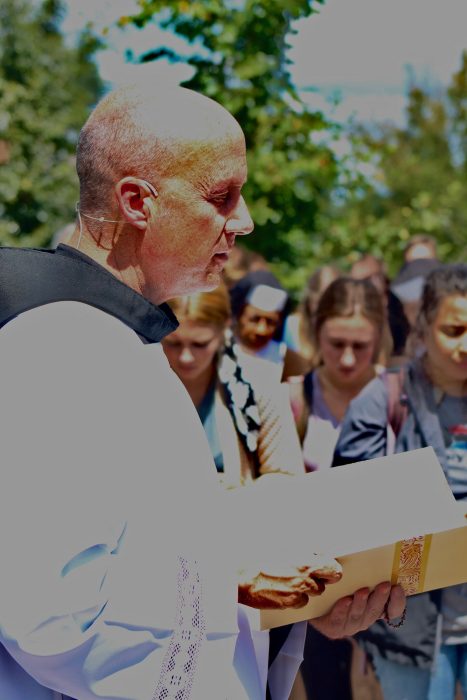 Calling on the Holy Spirit, friars, students and teachers crowded the Egan Plaza at 12:50 p.m. on Aug. 28 as the Rev. Dave Pivonka, TOR, led the blessing over the campus and new school year of Franciscan University of Steubenville.

Pivonka read from the Gospel of Matthew, which calls the people of God “the salt of the earth” and “the light of the world.” He connected these callings to the campus being known as “the light on the hilltop,” referring both to physical location and to the light of the student body.

Over the previous summer, Pivonka had asked students attending the Steubenville conferences to pray over every inch of the campus. He said holy water was flying everywhere. Pivonka made the same request of the local Dominican Sisters and later received a map marked with all the places on campus the order had prayed a rosary.

“I stopped counting, but it was something like 28 different places on campus where they prayed rosaries multiple times over the summer,” Pivonka said.

After the Gospel reading, Pivonka led petitions for the campus and everyone on it, as well as for all visitors and for the overall success of the school year. After praying the Our Father, Pivonka showered the people with holy water. “This is everyone’s favorite part,” he said.

Students were pleasantly surprised when they heard about the campus-wide blessing, and it made a profound first impression on new students in regard to life on campus. “It was amazing that we could do it on campus and not get in trouble,” said Catherine Wille, a junior transfer student. “I’ve never done this because it’s never been allowed.”

Junior Claudio Ferrari saw how Pivonka’s relationship with the Holy Spirit is already affecting campus. “Fr. Dave’s docility to the Spirit has enlivened what the campus was meant for: to be a place to know God and praise God,” he said.