Men’s household exudes authenticity in the spirit of St. Francis 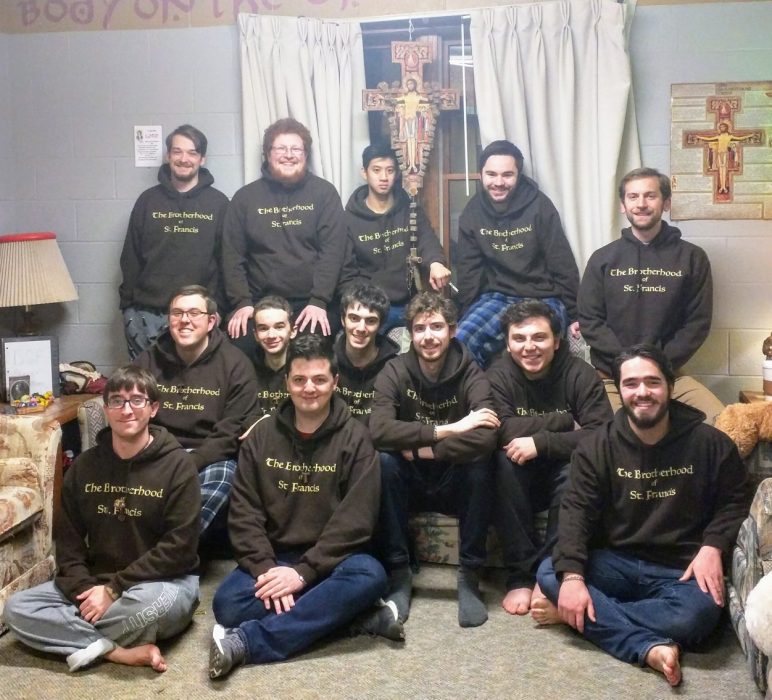 On Monday nights, students may notice a group of men wearing brown hoodies and lacking shoes walking around campus praying a crown rosary. These men, members of the Brotherhood of St. Francis (BSF) household, are known for their dedication to Franciscan spirituality and their caring generosity.

“In giving of ourselves, we receive,” said junior Sam Haton, BSF coordinator, as he explained his household’s central charism.

Located in St. Kolbe Hall, BSF is one of the three households on campus that specifically centers on the spirituality of the Franciscan order. The household has five specific charisms, each drawing from the spirituality of St. Francis himself: poverty, humility, chivalry, joy and charity. As Haton described, these charisms help members of BSF to be a community of men who are “simple, down-to-earth and genuine.”

Franciscan spirituality permeates this household. The brothers invoke St. Francis and St. Bonaventure as their two patron saints. Along with this, every member specifically chooses a particular saint to be his own personal patron.

The crown rosary, which the brothers pray while walking around campus barefoot on Monday nights, is a popular tradition of the Franciscan order that consists of a seven-decade rosary during which the men reflect on the seven joys of the Blessed Virgin Mary.

BSF members also try to be welcoming like St. Francis, who strove to encounter the Lord in every creature he met. When Haton joined his household as a freshman, he said that it was the community authenticity that initially attracted him. “I felt like I could talk to anyone,” he said.

Though it started out with a smaller number of household brothers this past fall semester, BSF saw significant growth as the year progressed, having several freshman intents, and Haton stressed the open invitation to all students to the household’s open commitments.

In addition to the crown rosary, BSF shares a holy half-hour before the Blessed Sacrament every Wednesday at 9 p.m. in St. Kolbe Hall’s chapel. Following this, the household reads and reflects on the life of the saint of the day. On Thursday evenings, the household hosts “Brotherhood Night” in order to share in community and fellowship, and it also celebrates Lord’s Day every Saturday afternoon at 4 p.m.

Haton’s goals for this semester are to “go outside” campus boundaries by engaging in two community projects.

“This semester, we’ll be hosting a food drive in which any student can donate one meal swipe,” said Haton. Each meal swipe donated will provide a meal for someone in need in the local Steubenville area.

The Brotherhood of St. Francis will also be hosting a canned food drive this semester, during which the household brothers will go out into the local neighborhood of Steubenville asking for donations. “Community outreach is our main goal,” said Haton.

BSF also presents its unique household charisms through fundraisers. Tentatively, the household brothers may have a crown rosary sale, in which they would sell handmade crown rosaries, all crafted from local resources. Closer to Easter in April, the household will host a coffeehouse night in the lobby of Sts. Kolbe and Clare Hall.

Whether sharing community in prayer or participating in the Church’s mission to care for those in need, the Brotherhood of St. Francis is a household that truly seeks to emulate and live out the life and teachings of the saint after whom it is named.