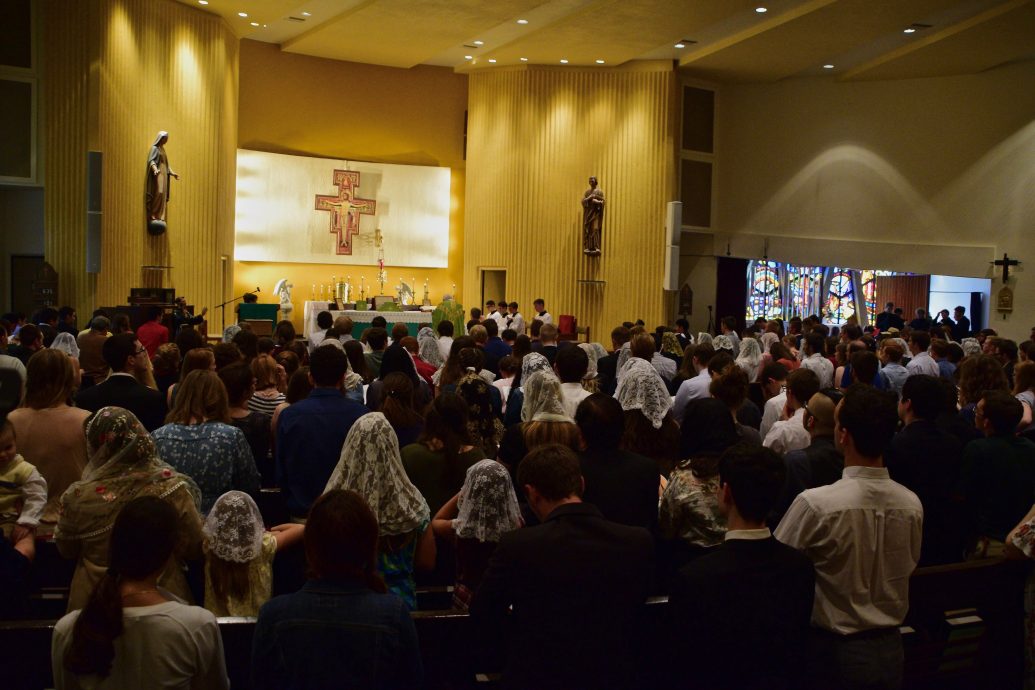 Sunday’s Mass was the first of eight monthly Latin Masses scheduled to take place on campus this academic year. The Rev. Vincent Huber, a retired priest from the diocese of Steubenville, celebrated the Mass.

Franciscan’s “Schola Cantorum Franciscana” sang the propers and ordinary for the Mass as well as motets by Giovanni Pier Luigi da Palestrina and William Byrd.

According to an official count provided by the chapel office, the 2 p.m. Latin Mass drew 436 students, professors, staff members and locals.

Tyler Boyd, a university senior who served as a sacristan at the chapel during the Mass, said that the size of the crowd was unprecedented.

“Today’s Mass was the largest Latin Mass we have ever had since it was first celebrated here in 2007,” Boyd said, referring to the year Pope Benedict XVI officially allowed the Latin Mass to be celebrated under all circumstances.

The congregation, which was too large to fit in the chapel, spilled out of the pews and into the hallways and vestibule, and many students had to stand throughout the Mass.

After the Mass, the Juventutem Franciscan club invited the congregants to a reception in the Fireside Lounge of the J.C. Williams Center to eat donuts and pizza.

Juventutem Franciscan, a new campus club which helped plan and advertise for the day’s Mass, is a chapter of an international organization devoted to the Latin Mass and became an official club a few weeks ago.

The club’s members aim to educate Franciscan students about the Latin rite of the Mass, to raise awareness of the Latin Mass community on campus and to provide transportation to the various Latin Masses celebrated around the area.

Sophia Stuckey, a senior philosophy student and assistant coordinator of the club, spoke about the club’s goals at the reception.

“Our main goal with Franciscan’s Juventutem chapter,” Stuckey said, “is to help our young men and women on this campus — through prayer, education and simple transportation to Mass — to grow in holiness through the beauty that is found in the traditions of our faith.”

The next Latin Extraordinary Form Mass at Christ the King Chapel will take place at 2 p.m. Oct. 13 and will again be followed by a reception hosted by Juventutem Franciscan.