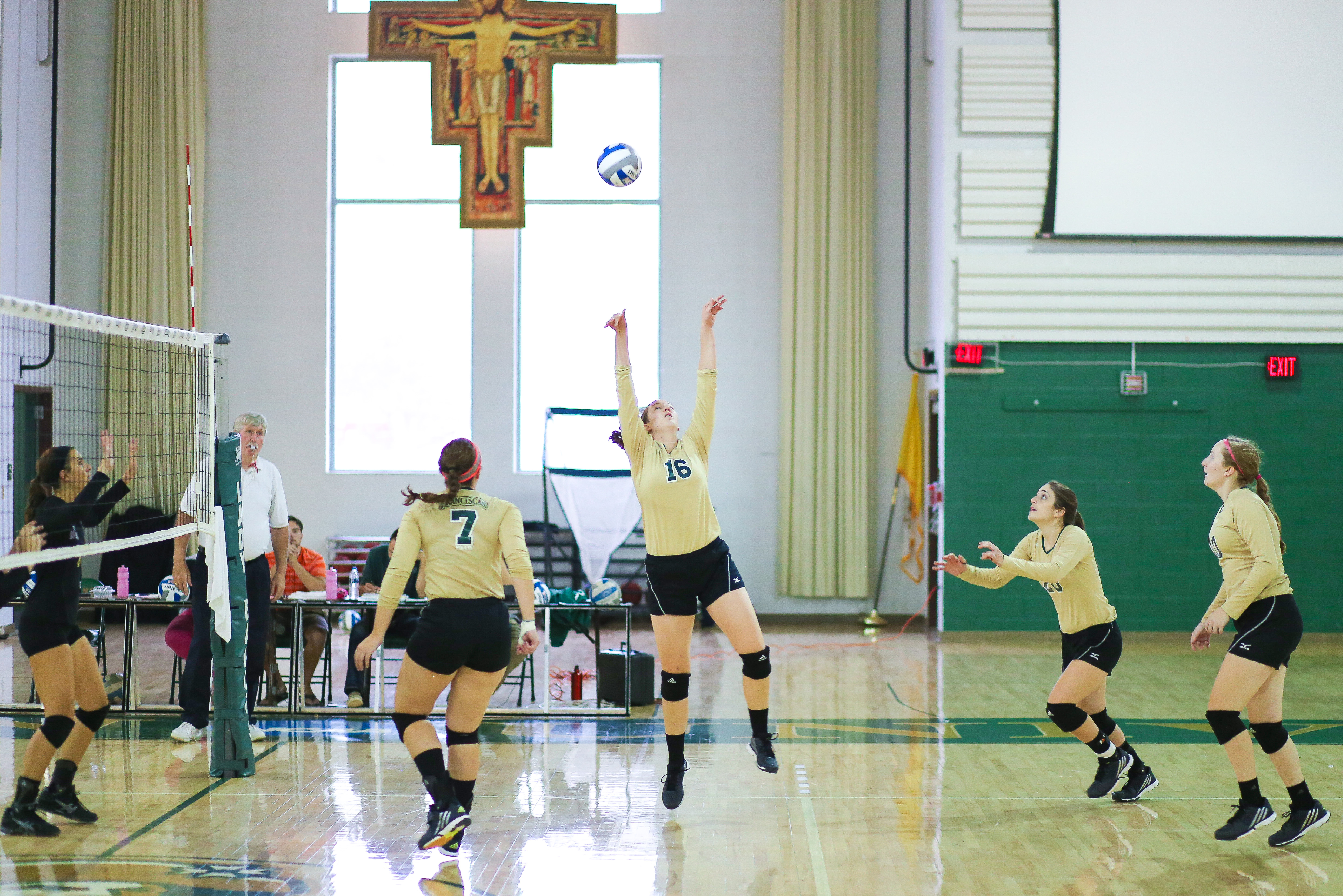 “We’ve played a lot of extremely tough teams recently,” Head Coach Kelly Herrmann said. “Certainly Geneva challenged us in every possible way. We battled and still did some things well in that match.”

Geneva College came into the match with an 11-1 overall record and challenged the Lady Barons right from the start with tough serving and a strong attack. Franciscan committed too many hitting errors in the first set, hitting for a total of zero percent.

The hitting percentage climbed in the final two sets, thanks to junior middle hitter Ellie Waldsmith, who led the team in kills with six in the Geneva match. She finished with 13 on the night.

“Her presence in the middle offensively is really, really important to us,” Herrmann said. “I thought she was aggressive on offense from start to finish and that’s a huge key for our team right now.”

Senior outside hitter/defensive specialist Christina Lawrence helped the Lady Barons to a second set win by playing one of her best matches in the season. Lawrence was given the opportunity to play front row for really the first time all season and she did not disappoint, finishing the Houghton match with 12 kills.

“She was the most consistent player in the match, the strongest player in the match,” Herrmann said. “I was just really happy for her because she is such a competitor and she wants to be on the court. It’s nice to see somebody when they get the opportunity, they make good on it.”

Freshman outside hitter Maria Ciola also had to make an adjustment, playing the two matches from the right side instead of the outside. The change did not affect her swing as she finished with 16 kills total on the night.

“It was interesting to have Maria on the right side,” Herrmann said. “Maria is very capable over there. Adjustments in the early part of the season are good because, then, when they happen later in the season, you are not shocked or overwhelmed.”

Herrmann was pleased and excited to be able to play host to the two collegiate teams and four high school teams for Dig Pink Day as the teams try to fundraise for breast cancer research and treatment.

“Any time that you look outside yourself and reach out to other people, that’s a good thing,” Herrmann said. “It’s a lesson in being selfless and that’s one of the things that we try to focus on with our team is to be selfless and to sacrifice for one another. To be able to fundraise and know that we are helping people in need is a great opportunity.”

Proceeds from the day will benefit the Dig Pink foundation and the local TEAR foundation.

Franciscan’s next match will be at home on Sept. 23 at 7 p.m. against second-time opponent Carnegie Mellon.