Lady Barons honor graduating players on and off the field 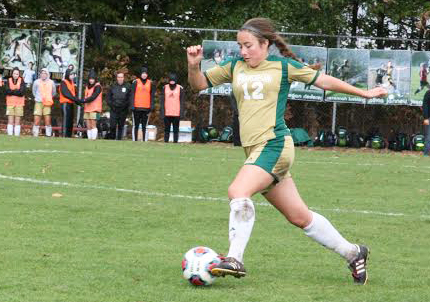 On the cold and cloudy afternoon of Oct. 22, the Lady Barons took the field in opposition with the Medaille College Mavericks to wrap up their 2016 season.

Despite the poor weather, both teams played valiantly in a battle of possession, leading to a scoreless first half. The Lady Barons came into the second half with extra energy in their step.

Senior Kristie Kelly took a free kick from about 25 yards out and buried it in the top left corner of the net, starting the shooting frenzy.

Senior Jasmine Florentino brought the team to a 2-0 lead a few minutes later with a direct shot from 15 yards out to the right side of the goal. It was her first career goal.

On a roll, Florentino then set up an assist to senior Elizabeth Krilich who shot right past the Maverick goalie. Just fifteen minutes into the second half the girls had secured a 3-0 lead.

Olivia Janney was the fourth to score with 23:30 to play. Assisted by Joanna Dawyot, Janney lofted the ball over the Maverick goalie.

Krilich scored her first goal of the season with a free kick over a wall of Maverick defenders, bringing the Lady Barons to their final score of 5-0.

The Lady Barons finished the season strong with a 6-10-1 record and a 3-5-1 slate in conference.