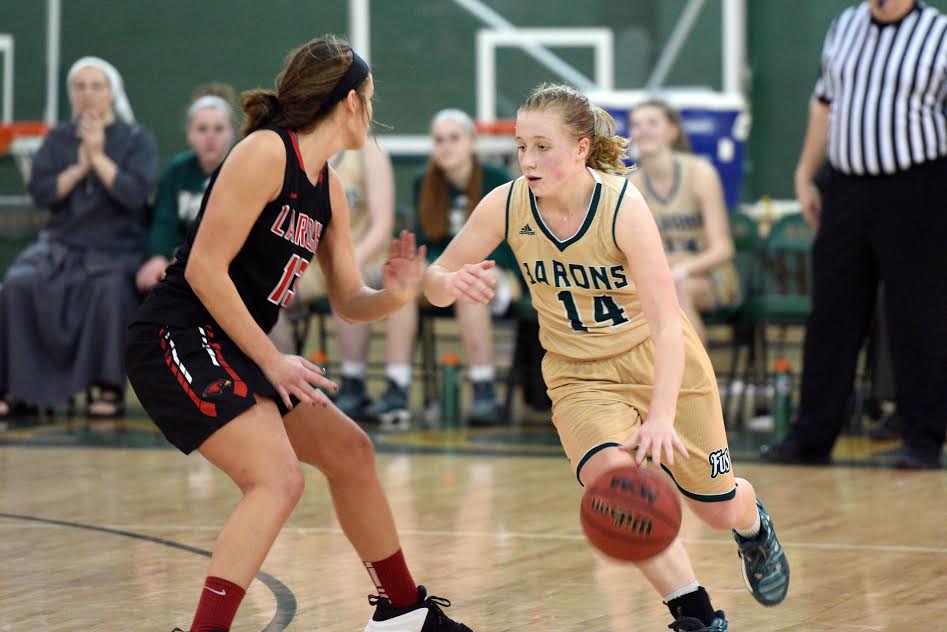 The women’s basketball team of Franciscan University of Steubenville showed vast improvement in a 63-50 loss against La Roche College, statistically the top team in the AMCC Conference, on Wednesday, Jan. 25.

The Lady Barons took a 7-5 lead after surrendering a quick four points, courtesy of five points in transition from junior guard Sarah Schriner and two Gaby DeJesus free throws. Despite a characteristically dominant La Roche offensive front, two more points from DeJesus and a midrange jump shot from senior forward Johanna Roach kept the score close at the conclusion of the first quarter.

Twelve seconds into the second quarter, freshman guard Abby Baierl cut the deficit to three with an uncontested jumper near the free throw line. Much of the remainder of the half was a testament to the power of La Roche’s perimeter shooting ability: the Red Hawk women connected on multiple 3-point attempts, extending their lead to 27-17.

Franciscan responded with characteristic Lady Baron offense: Baierl connected on another jump shot with just over four minutes left in the quarter, and senior forward Bernadette Roach hit two free throws. Both teams traded baskets for the remainder of the half, and Franciscan would enter the locker room at halftime down 10 points, 34-24.

La Roche began the scoring in the third, slicing through the Lady Barons 2-3 zone defense to extend their lead to 13. Baierl’s layup and Schriner’s free throw would bring the deficit back to ten, but the Red Hawks would dominate the remainder of the quarter, outscoring the Lady Barons 18-12 in the third.

In what has become typical of the women as of late, much of their scoring would take place in the fourth quarter. Their 45.5 percent field goal percentage for the quarter was statistically the highest of the game, thanks in part to increased ball movement by DeJesus, who handled the ball for the majority of the contest.

Despite the loss, Head Coach Suzy Delaney had much to celebrate in the loss. The last time her team faced off against La Roche College, this past November, they were outscored 67-32.

She noted Baierl’s consistent improvement over the course of the season.

“I was impressed by Abby’s game tonight, especially her consistency on the offensive end,” said Delaney. “She has been solid for us all year.”