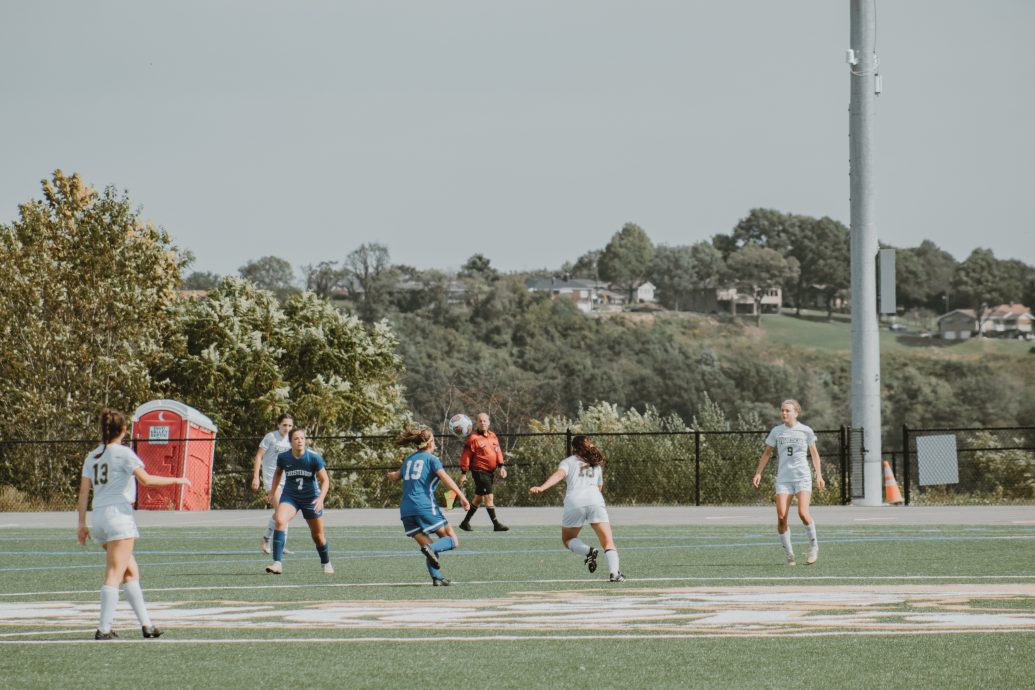 The Franciscan University of Steubenville Lady Barons soccer team played an offensive game Saturday at noon that resulted in a 6-0 win against the Christendom College Crusaders.

The game began with a goal made by graduate student midfield Claire Dawyot, connecting a centering pass from freshman left wing Tania Davidson.

The match then moved into a highly contested 15 minutes with no scoring. The stalemate was broken by Davidson assisting graduate student forward Kaitrin O’Leary to the second and final goal of the first half.

The Lady Barons upped their offense in the second half and fans cheered at their four successive goals, with the ball remaining in Christendom’s defense for 25 minutes.

Dawyot sunk a second goal into the net, alongside scores by Davidson, freshman forward Casey Boin and freshman right wing Anni Winogradoff. Franciscan spirits were heightened after the shoot-out victory was solidified and the Lady Barons beat Christendom 6-0.

An unofficial pep band named Horns on the Hill provided a soundtrack for the Lady Barons’ minor victories by blowing kazoo-like instruments at every goal and playing renditions of songs like John Denver’s “Take Me Home, Country Roads” during halftime.

The ringleader of the brigade, freshman Matthew Barranco, said he was inspired to organize the pep team from thinking, “How cool would it be if we had a whole armada of people with horns (to) celebrate the (Lady Barons) and support them?”

Head women’s soccer coach Sarah Salamida said the game was an “ad hoc” match that was arranged only a week prior.

“I was really impressed with (sophomore midfield) Gabriella de la Torre and her play today,” said Salamida. “I think she won just about every 50-50 ball that came to her. … Casey Boin … had some creative rounds offensively and really looked to split (the Crusaders’) defense.”

Salamida said, “We put a much better second half than a first half, we are looking to connect passes, and to spread the field offensively and to work together.”

The Lady Barons’ next home game will be against La Roche University on Sept. 15 at 3 p.m.