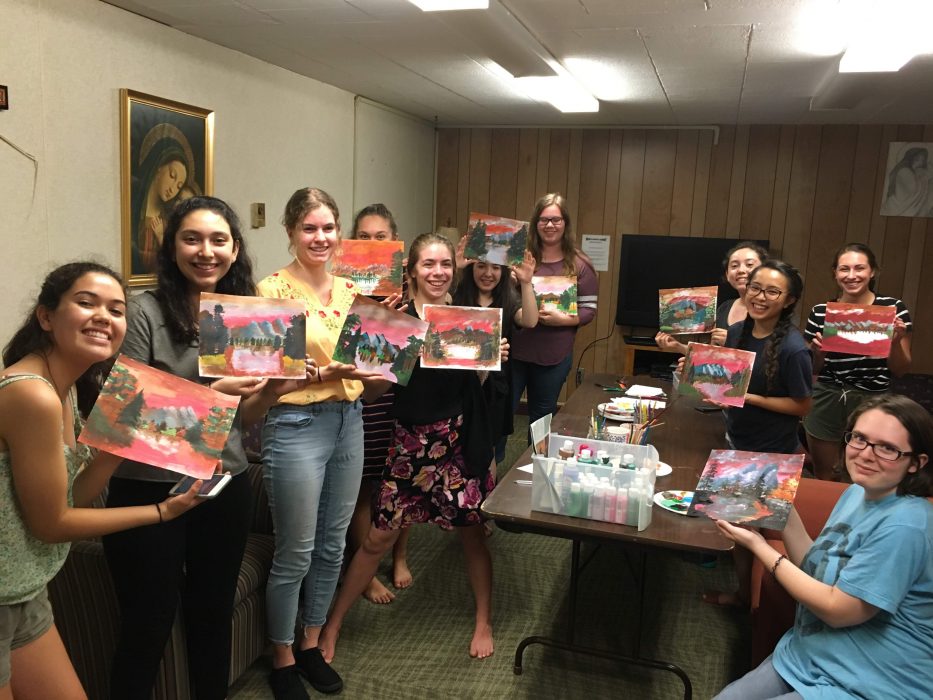 “It’s a way to help out the residents who live here,” Romero said. “When I was a freshman, I really appreciated having the RAs and I want to help others have a good transition to student life.”

“Being an RA is absolutely ministerial,” said Tonianne Zottoli, a first-year resident assistant in St. Thomas More Hall. “I get to walk with Christ’s daughters in some of the most intimate ways, watch them grow, struggle, experience joy. Being able to serve them … is a tremendous honor.”

Like most ministries, each resident assistant has a different way of reaching his or her residents, but one of the biggest is by putting on a variety of programs.

“We’re here to help the residents,” said resident assistant Dom Gabriele of St. Junipero Serra Hall. “We’re here to assist them in transitioning to adulthood, and everything that we do is to build community as well for the safety of those around us.”

Earlier in the semester, Gabriele put on a “Dom’s Spaghetti” event in one of the lounges in his hall, where he served Italian food from Scaffidi’s Restaurant & Tavern and set the room up to look like the Italian restaurants in movies, complete with a “Wall of Fame” featuring photos of the other resident assistants in the hall. Several of his residents came to spend time and eat together while the sounds of Dean Martin, Andrea Bocelli and other Italian crooners played on.

Anne Sweeney, a resident assistant in Marian Hall, put on a “Bob Ross Painting Night” where residents watched videos of noted artist Bob Ross and painted “happy little trees,” as Ross was known for. Katie Davis of Sts. Kolbe and Clare residence halls held “Cocoa and Coloring” as a pre-finals week de-stresser, which was a big hit.

“Community is so important for successful and fruitful dorm life, so I love any role I can play in that,” Davis said. “It’s just so nice to make people happy, especially during the stressful times of college life. Those little moments really make the job.”

While social programs are great for building community, resident assistants are also sure to be available to students who want more one-one-one interaction.

“Simplicity is key,” said Gabriele. “Sometimes, I’m just hanging out in my room and I’ll just open up my door, put some music on and play some video games. … I think that’s just as important as big events.”

Sweeney agreed, saying, “If they need to talk, they can reach out to me. If they need some tea, I’ve got some. Truly, it helps to know you have at least one person that supports you and prays for you, and that’s what an RA is.”

“As a freshman, I thought RAs were nothing but narcs,” Romero said. “Then, when I became an RA, I saw the other side of Res Life that I didn’t know existed.”

Davis said, “There’s so much more to being an RA that people genuinely don’t know about, so it can get disheartening at times. However, we persevere in every way we can out of a desire to do what’s best for our residents.”

Sweeney called being a resident assistant a continual, intentional choice, saying, “It’s much more than a clock in and clock out job.”

“As RAs, we live in the same place we work, thus it’s a position that never stops giving,” she said. “Day or night, studying for a test or not, we continually have to be able to stop and give what we have to offer. … Approaching this job entails being open to how the Lord wants to use you for each situation and interaction.”

In the end, Zottoli said, the hard work and sacrifices – crazy emergencies, early-morning staff meetings, sleepless nights and more – are worth it because she wants her residents to have the best experience possible.

“(As a freshman) I wanted someone to be radically available to me,” she said, “and because I did not have that, I want to ensure that at least one person is able to receive it from me.”