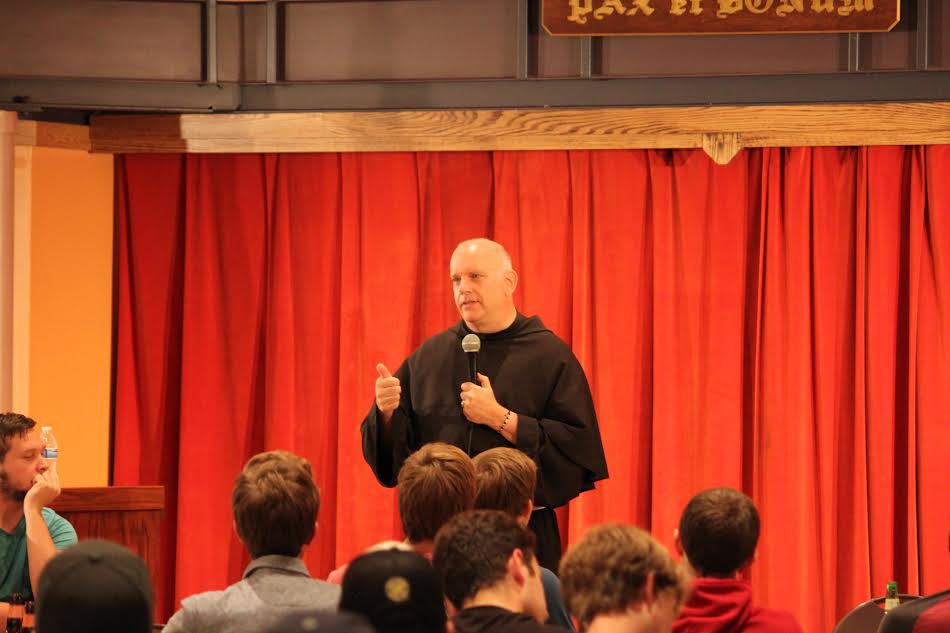 “I imagine that no one in this room has ever made a mistake in their life.”

The humor and smile of the Rev. Sean O. Sheridan, TOR, were on full display as he delivered his talk, “The Life of Saint Francis,” to a filled Gentile Gallery Tuesday night, part of another successful Men’s Ministry’s event.

Said Sheridan, “Our world is in somewhat of a crisis when it comes to good fatherhood. There’s a need to reinvigorate in society the passion to be real men, to be fathers.”

Sheridan delivered the core of his talk on this issue, using examples from Francis’ life to illustrate what it means to be a father today.

Sheridan outlined three simple ideologies, embodied by Francis, which contribute toward solid fatherhood. “Be present to your children, be patient with your children, and be forgiving of your children,” he said. Living the correct definition of fatherhood, he continued, means understand-ing that the true source of fatherhood is God the Father.

After an opening prayer, Sheridan outlined the three orders of Franciscans which Saint Francis instituted in the early 13th century. After describing the First and Second Orders, Sheridan detailed the specifics of the order on campus, the Third Order Regular. “The regular comes from the (Latin) ‘regula’, which means ‘rule,’” he said.

“There are well over 70,000 Franciscans living throughout the world,” said Sheridan, “but there was much more to Francis than just him founding orders.”

Sheridan then described the role of the Third Order Seculars, individuals who according to Sheri-dan wish to “lead a Franciscan way of life” within the context of lay society.

“Francis just wanted to be off by himself and giving glory to God. He never set out for greatness,” said Sheridan, praising the brother’s humility and openness to the way God called Francis to serve.

Sheridan took questions from the audience before handing the microphone back to Bob Siemens, director of the Office of Evangelization. The night concluded with the reception of a plenary indulgence in the Portiuncula and praise and worship.

2016-10-17
Previous Post: Paint night provides a break from midterms
Next Post: Austria Adventures: How to not make plans