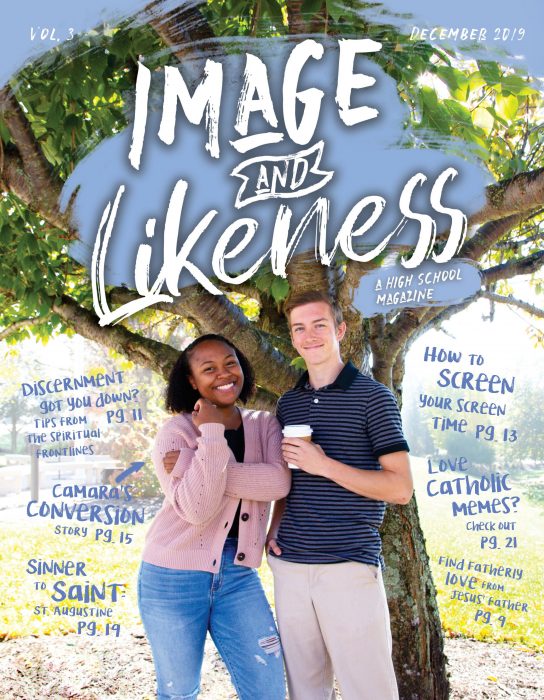 Franciscan University of Steubenville alumna Maggie Pawsey and senior Franciscan student Rachel Miller have been friends for years. Only recently, however, did they begin to dream of working together in a business partnership.

It started at Franciscan, when an organization called Values Outreach was expanding, spreading its mission of embracing one’s human dignity, one’s inherent value. Values Outreach was established by Cassidy Roderick, a student at the time. In the fall of 2018, additions to the club were made, including a media branch that both Pawsey and Miller began contributing their gifts to after the initial meeting. Pawsey edited and Miller wrote for what would be called Image and Likeness magazine.

The following spring, Values Outreach moved to be under The Catechetical Institute. Image and Likeness would have been made a blog had Miller not stepped in to petition otherwise.

“I convinced Cassidy that it was very important,” she said, “and God provided from there.”

Miller and Pawsey had decided to run the magazine together, with Miller as editor and Pawsey as assistant editor, the positions they still hold. The magazine ran that semester as a part of Values Outreach, and the following semester, fall of 2019, it became independent from Values Outreach but remained under the Catechetical Institute.

It was during that time that Miller and Pawsey were inspired to change the magazine into a non-profit organization. Sitting “under the guise of doing homework,” said Miller, God spoke through Pawsey in words that are “ingrained” in Miller’s mind: “What if we don’t leave the magazine here?” said Pawsey. “What if we take it with us when we graduate?”

Ideas started flowing from there. That same evening, both women ran excitedly to the Blessed Sacrament to “ask (God’s) blessing,” said Pawsey.

“We were pretty sure the idea came from him anyway,” she said. “And we’ve been going from there ever since.”

“I doubt we’ll ever make a penny off this for ourselves, but hey, great,” said Miller. “All the more money we can channel to the cause of the kingdom.”

The magazine’s mission will continue to strive to nurture in youth and young adults a love for their Catholic faith and themselves, who are created in God’s image and likeness. While the name of the magazine will remain the same, the non-profit’s name — yet to be released — will share the same message: “to address the problems of our society at the roots,” described Pawsey, “to heal the most basic relationships we have — with ourselves, with each other and with God.”

As the two women look ahead, they both look forward to devoting more of their time to the mission of the magazine. They will be able to think more broadly, said Pawsey, without the pressures of collegiate academics or semester deadlines to hold them back. Both women said they are interested in expanding the non-profit beyond the walls of Franciscan, looking to other Catholic universities or Newman Centers for writers, layout editors and other necessary staff members.

Pawsey hopes the magazine will be more widely distributed over the next five years. She also would like to start an elementary-level magazine for students in first through fifth grade.

Miller said she hopes to still be running the magazine with Pawsey and many more people from across the country.

“There are so many paths we could take,” said Miller. “We’ve just been praying for God to blow open the doors he wishes us to go through and slam shut the ones he doesn’t. He’s carried us this far.”

Those interested in supporting the magazine can find a table in the upper level of the J.C. Williams Center Feb. 26-28 between 10 a.m. and 6 p.m. Staff members will be accepting donations starting at 50 cents in an effort to break the fall 2019 fundraising record of $860.