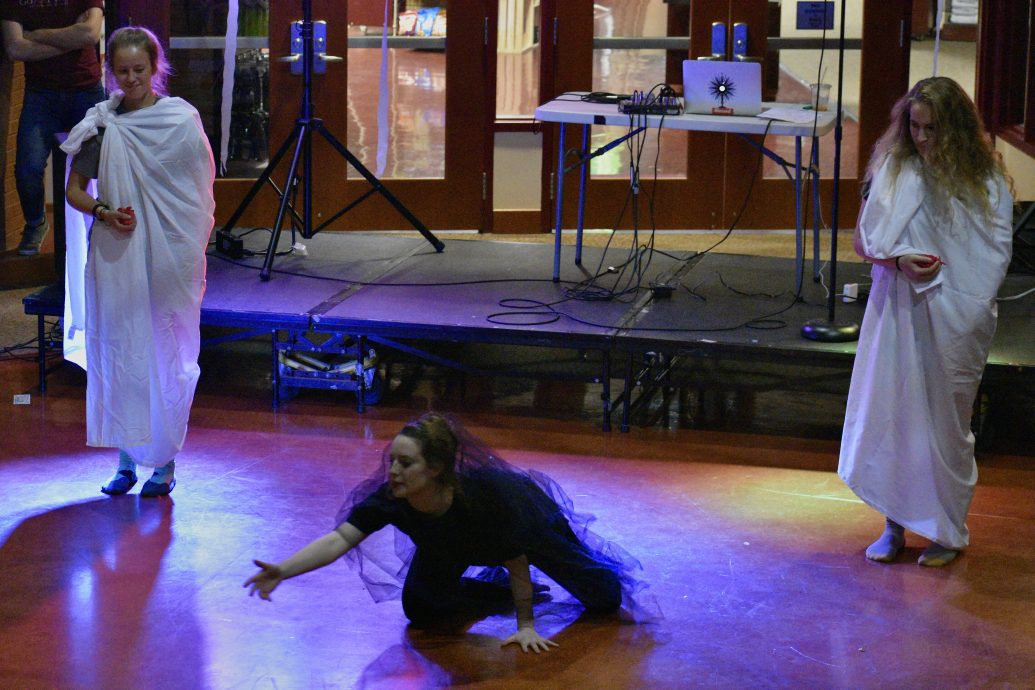 The J.C. Williams Center was brimming with music and excitement at 9 p.m. Wednesday, Oct. 12 during the Guardians After Party.

Organized by the Guardians of the Divine Will household, the event lasted until midnight. The night began with multiple lip-syncing performances, followed by a standard dance. The party boasted a sizeable crowd, drawing attendees to both floors of the venue. Streamers and strobe lights transformed the area into a fitting dance hall.

In addition to the dance routines, each act had a unique gimmick to set itself apart. One act resulted in the performer having his hair cut off by a spectator. Other acts utilized hairbrushes as microphones, guitars and a tarp labeled “time machine.”

The songs used for the routines were varied, ranging from “Greased Lightning” by John Travolta to “Year 3000” by the Jonas Brothers.

The Guardians’ cleanup team had its own moment in the spotlight cleaning up flower petals, money, confetti and human hair. After all of the acts were complete, the party transitioned into a dance in which the attendees could participate.

Freshman Elena Mirus, who attended the event, said, “I thought (the after-party) was really cool. I really liked the ‘Seven Rings’ performance. … I was excited for the event, and I think it went really well.”

Junior Daniel Arenas, simultaneously the Guardians’ household coordinator and DJ for the night, expressed his happiness with the event. He commented on how much he enjoyed the chance to hang out with his friends. Arenas performed a routine with a few of these friends in which he was splattered with glitter, shampoo and water.

Referring to his role as the DJ, Arenas said, “I love to DJ. … I love to help people have a good time through music.”

Arenas and the Guardians certainly had the crowd up and moving during this fun-filled night of music and revelry.

2019-10-14
Previous Post: Author lifts the veil to secrets of Eucharist
Next Post: Academic lecture highlights importance of difference between genders