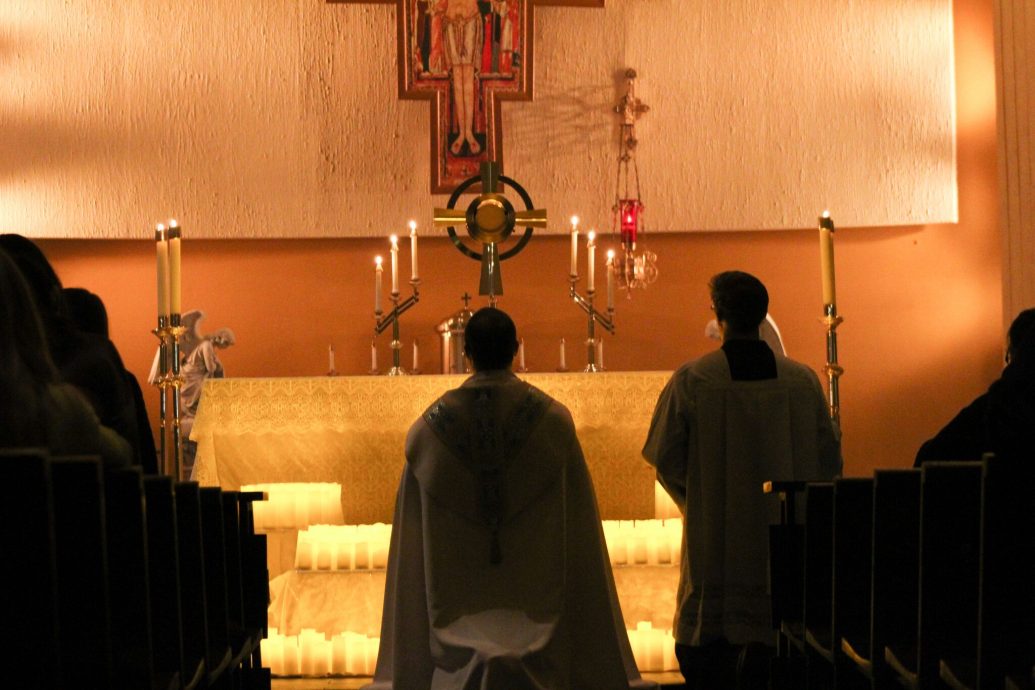 Several dozen female students gathered in Christ the King Chapel for an hour of Eucharistic adoration and a talk by Brother Daniel Klimek, TOR, at 7 p.m. on Feb. 8.

Sister Teresa Reyes, TOR, opened the event, titled “Consoling the Heart of Christ,” with prayer and introductions before praise and worship began.

Following the initial exposition of the Blessed Sacrament, Klimek led the women in prayer. He then began speaking on the significance of suffering and the privilege of consoling the Sacred and Immaculate Hearts.

“This beautiful sacrament is treated like a commodity,” said Klimek. “What a beautiful privilege that we have to console God and the Blessed Mother.”

Klimek then turned to St. Catherine of Siena as an example of a woman who loved Christ and hiscross. She would often focus on the blood of Christ, which was mentioned about 1,800 times in her writings. Commenting that secular scholars are often taken aback by this, Klimek said, “I love the strangeness of the saints. Their eccentricity.”

Klimek also spoke about the role women can play in spiritual warfare, looking to the Blessed Virgin as their example. He encouraged them to see Mary’s maternal tenderness as well as her strength as the woman who crushes the head of the serpent.

Continuing the theme of spiritual warfare, Klimek said, “Sisters, you do not need to hear from me lovey-dovey stuff about how beautiful you are. … That should be common sense,” eliciting laughter from the crowd.

He spoke on the power of prayer, especially in the context of a nocturnal holy hour, sacrificing time for adoration for the world’s salvation when “the world is asleep,” Klimek said.

Klimek concluded his talk by emphasizing the value women can have as intercessors and spiritual warriors with each other, Christ and the saints on their side.

After Klimek’s talk, the sacrament of reconciliation was available to attendees while praise and worship continued.

The event ended with prayer teams in the chapel and a social hour in the Fireside Lounge of the J.C. Williams Center. Food and hot drinks were provided.

Christina Sheehan, sophomore nursing major, said she originally was not planning to come to the event but was really glad she did.

“I love how (Klimek) encouraged us, … challenged us to go to sacrifice and to realize how powerful we are through Christ’s grace,” said Sheehan. She said she was struck with the awareness that women “are called to be warriors for Christ … (and) salvation of souls depends on it.”

“It was definitely a healing night in ways I didn’t expect,” she said with a smile.