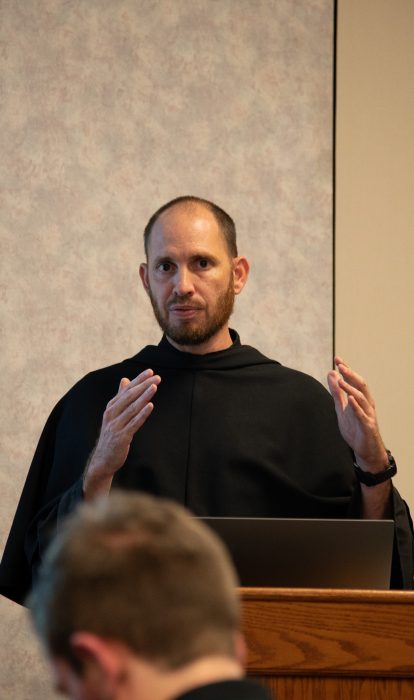 The claim that Lord’s Day is Protestant lacks historical knowledge, said a Franciscan friar in the International Lounge Oct. 25 at 8 p.m.

The Rev. Gregory Plow, TOR, explained the Hebraic and Catholic roots of Lord’s Day during a talk entitled “The Catholicity of Lord’s Days.”

The Seder or Passover meal provides a “foundational nature” for Lord’s Day, Plow said. Reading from Exodus 12, he highlighted the selection of the lamb as an analogy for preparing for the Lord’s Day.

“From a Catholic and Christian perspective, there is a sanctity to holding vigil,” Plow said. “While we don’t celebrate the Passover anymore … we see the value in holding vigil.”

According to Plow, the nature of a Lord’s Day consists of holiness, sanctity and joy. A good Lord’s Day does not tend to extremes like excessive shouting, but it should fall “somewhere in the middle between reverence and joy,” Plow said.

Lord’s Day is paraliturgical, meaning “the Lord’s Day is not the Mass, but it runs alongside of it. It’s not sacramental, but it has references to the liturgy,” Plow said.

Plow also mentioned the history of households at Franciscan University of Steubenville. When the Rev. Michael Scanlan, TOR, who was president of the university from 1974-2000, introduced households on campus in 1974-75, Lord’s Day was the only required commitment.

“Lord’s Day has been part of households for almost 50 years,” Plow said. “And it’s (been) the one consistent thing, even before your covenants ever existed.”

Scanlan chose the name “households” from Acts of the Apostles, which references the “faith of households.”

“These were smaller Christian communities who would gather in people’s homes and have a prayer service together,” Plow said.

Called a Christian seder or agape meal, the non-Eucharistic prayer gatherings were separate from the Mass and resulted in part from the Jewish background of early Christian converts.

The Christian seder meal then developed in cultures around the world as a “grassroots prayer service,” Plow said. The meal forms the basis for Lord’s Day.

Sophomore Evelyn Lundy said, “I appreciated the emphasis on the fact that the bread and wine at Lord’s Days are not symbols of the Eucharist, but rather imitations of the meals shared by the early Church.”