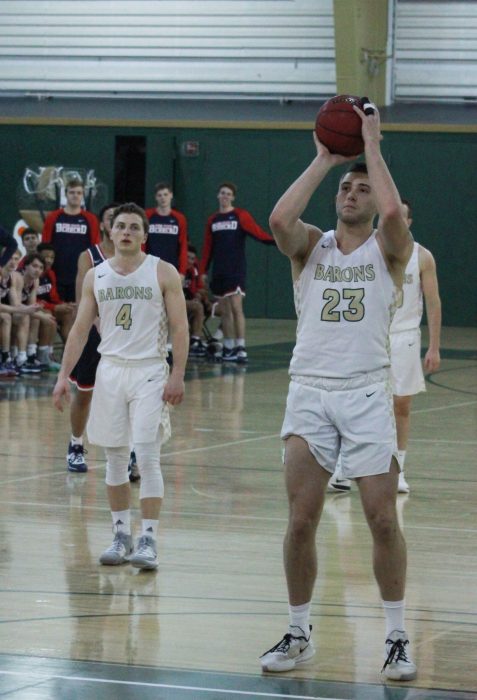 Franciscan University of Steubenville men’s basketball won in the jaw–dropping final seconds of the game against Penn State Behrend this Saturday at 2 p.m.

The entirety of the game was very close, as both teams continued to rack up points neck and neck so that neither had a significant lead for long.

Sophomore guard Andrew Salasek started off by scoring the first points of the game.

Both teams played good defense, and both struggled with missing shots taken, despite the high final score. In the first half, there was a significant number of charges committed against Penn State by the Barons, totaling four by Franciscan and one by Penn State by half time.

Sophomore forward Travis Lien, junior guard Sean Hickey and senior forward Joe Schriner each made 3-pointers in the early going of the game, and Lien scored five points in the last minute–and–a–half of the first period.

Halftime consisted of one of Franciscan’s baton twirlers performing a routine with batons to audio clips from the well-known show “The Office”, which ended with lighting the batons on fire.

The Barons got to a 7-point lead at 12:55 minutes, but Behrend pulled ahead. With less than three minutes to play, junior forward Drazen Frankovitch took the lead once more at 52-51 Barons.

The crowd roared wildly as senior center Matt Trent shot the winning 2–pointer in the last four seconds of the game, giving Franciscan a win against Behrend at 54-52.

This was a milestone win for the Barons, as it was their first win against Behrend since 2010. The Barons’ season is now 7-11, whereas Behrend’s is 13-6.

“I thought our defense intensity was at a high-level today, which has been lacking,” said head coach Joe Wallace. “This is a big win for us. As a program we’ve only beaten them once in the whole history of Franciscan men’s basketball … We played with a lot of intensity and heart today, and I think if we continue that the rest of the way we are going to be able to get some wins here.”

Wallace said he was “ecstatic about the whole thing.”

The Baron’s next home game is Wednesday at 6 p.m. against Mount Aloysius College on Kuzma Court.