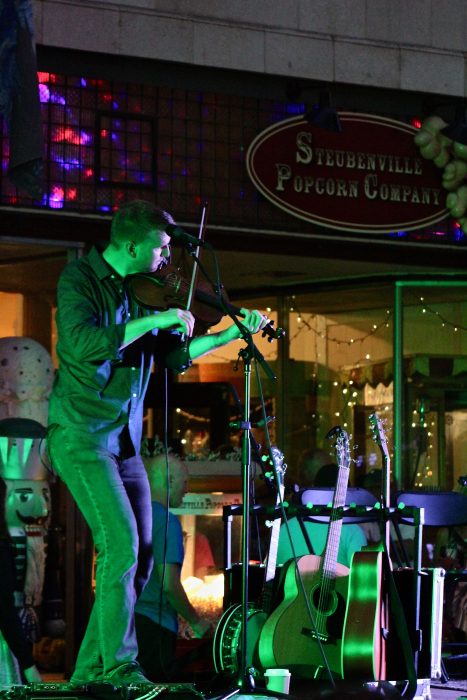 Students, professors and “townies” flooded Fourth Street in downtown Steubenville the evening of Sept. 6 for the First Friday Celtic Fest, a night of good food, tunes and fun.

Colorful food trucks and artisans’ stands lined Fourth Street and attracted shoppers while Celtic music filled the air. People from all walks of life came together to celebrate Irish culture and the heritage of the city of Steubenville.

Local stores like BookMarx and Leonardo’s Coffeehouse stayed open for business late into the night. Lines of customers swirled through the coffeehouse as patrons grabbed hot drinks or caught up with friends.

“I always end up at Leonardo’s. That’s just a fun place to go hang out,” said senior Antonino Castellano.

On the main stage just outside of Leonardo’s, the Irish music and dancing quickly became a crowd favorite. Castellano said, “Seeing people dance is really my favorite part, especially the Irish jigs.”

Musicians took to the stage to perform various Celtic ditties in a Battle of the Bards. The music continued as the Franciscan University of Steubenville Irish Dance Club performed on plywood in front of the stage. Their tapping toes inspired children to mimic their steps and even join the students in a group dance.

The Bungalows, a band consisting of five Franciscan students, also made an appearance and played hits like “Don’t Worry, Be Happy” by Bobby McFerrin, “Viva La Vida” by Coldplay and a Franciscan classic, “Country Roads” by John Denver. Students danced and sang along with the band, cheering for an encore.

Students also appreciated the communal glow of Fourth Street. Senior Isabelle Tosques said, “My favorite part is that Steubenville is doing something for the community and it’s good for the economy.”

“The best part is seeing the community come together,” said Janda. “It’s something very rare to see. (It’s nice to see) people who have lived next to each other all their lives, especially in this day and age, and finally getting to know each other and talk.”

First Friday on Fourth Street is sponsored by the Harmonium Project. The next First Friday will begin at 6 p.m. on Oct. 4.