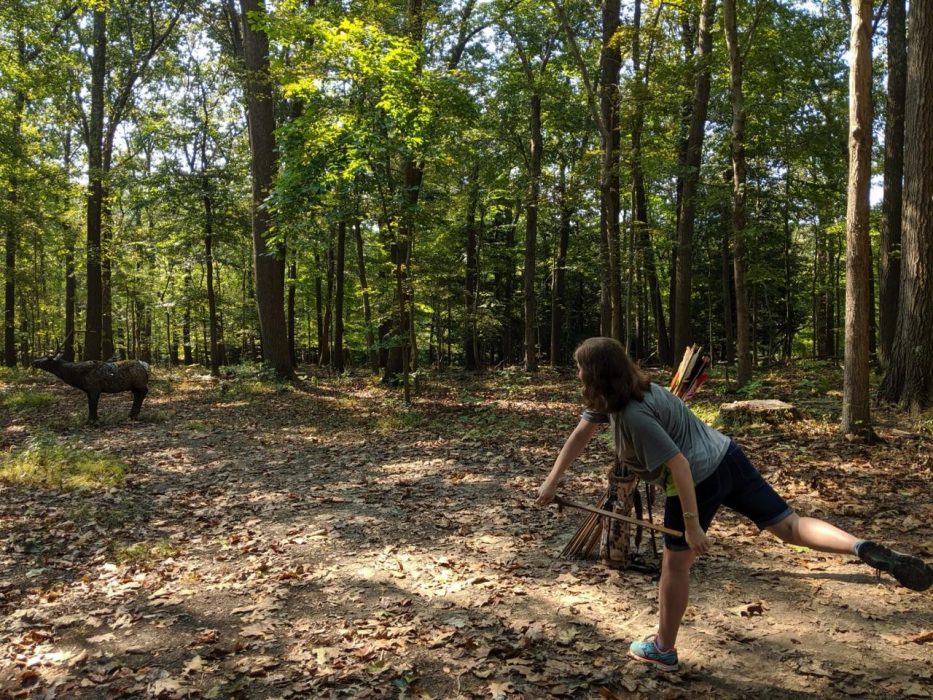 Saturday, Sept. 21, the Explorers of the Past: History and Anthropology Club lived up to its name at Meadowcroft Rockshelter and Historical Village, covering over 16,000 years of history in a few hours.

Located about half an hour from Franciscan University of Steubenville, Meadowcroft is home to a variety of historical artifacts, exhibits and activities which kept the visitors busy all afternoon.

Most notably, Meadowcroft Rockshelter has the oldest archaeological evidence of human presence in North America, having been used as an ancient “campsite” for thousands of years. Underneath many strata of sandstone, evidence of human life dating as far back as 19,000 years ago still endures. The visiting students listened to a presentation on the history and discovery of the area and viewed the excavation itself.

The site is also home to re-creations of various historical villages, where visitors are encouraged to interact with and immerse themselves in the history represented.

In the 1570s Monongahela Indian village, visiting students learned about Indian craftsmanship and agriculture but were most excited to try “hunting” with an atlatl, a precursor to the bow and arrow which flings large, spear-like darts at one’s target. Though warned that only one in every 100 persons succeeds in hitting the elk target, the Explorers of the Past distinguished the Franciscan name, and three of the 11 attending club members felled their “elks.”

Similarly, the 1770s Frontier area featured tomahawk-throwing — at which many of the club members excelled — as well as a re-created Indian cabin.

The final and largest stop was a rural 1890s village. In the log house, a historical re-enactor taught about the day-to-day life of the period; in the chapel, live musicians performed folk tunes; and down in the smithy, the blacksmith forged away.

One of the highlights in this village was the one-room schoolhouse, where visitors learned about historical teaching methods. As part of the demonstration, club members took part in class recitations and punishments, and several of the men were required to don floral bonnets for “disrupting the class.”

Being sure to stop by the gift shop, students left with souvenirs, a new appreciation for early American history and memories to last a lifetime.

The club president, senior Katie Hugo, was pleased by the attendance and participation and thoroughly enjoyed the destination: “It went well — it was our most well-attended trip to date.”

Having been asked to join several demonstrations, Hugo said that she “really enjoyed playing the jawbone or throwing an ax.”

Junior Felicity Moran, vice president, summarized the goal and outcome of the trip. “Everyone learned a lot and had a good time.”

“That’s what this club is all about: learning history and having fun while doing it,” she said, “which sometimes includes throwing hatchets.”