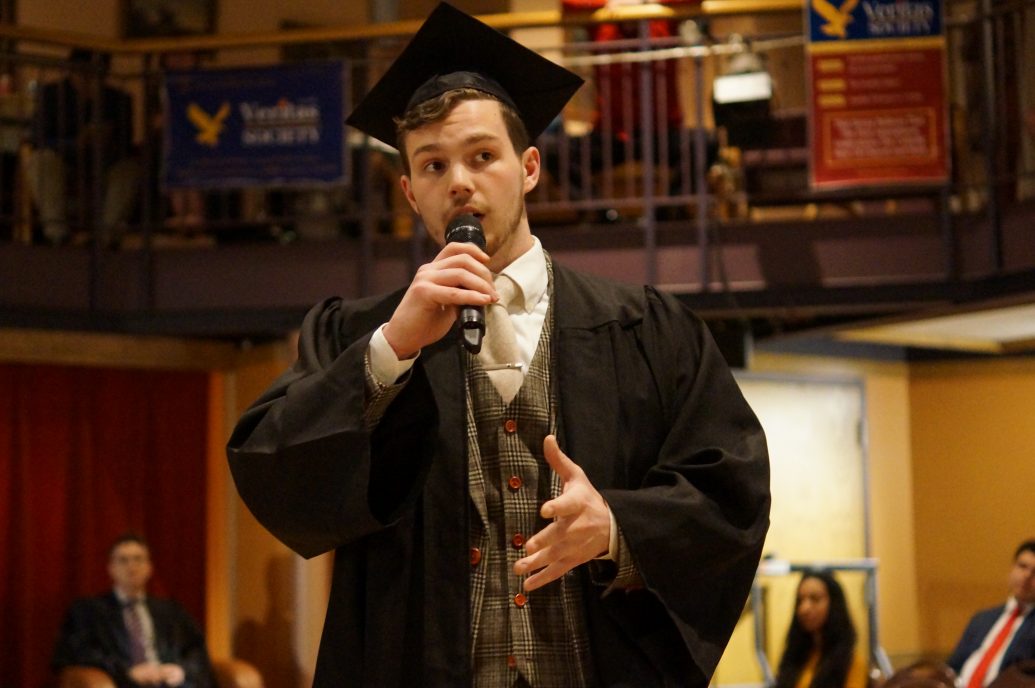 Students at the last Dumb Ox Debate of the semester Sunday, April 18, ruled by a close vote that the academic culture at Franciscan University of Steubenville is not excellent.

The event, part of the Veritas Society’s “Anniversary Weekend” celebrating three years of debates at the university, addressed the motion “This house believes that Franciscan’s academic culture is not excellent.”

Graduate Nick Larkins was the first to affirm the motion, arguing that, as a self-proclaimed liberal arts institution, Franciscan must have a better structured core curriculum.

There is no “intelligent ordering principle” behind the core curriculum, he said — there are too many classes to choose from and they are approached as unrelated subjects instead of as all part of one big story about humanity.

While there are certain outstanding classes and professors that do focus on the formation of the human person as a whole, “the university has not structured the course curriculum such that this is the general experience,” said Larkins.

“An academic culture would be the circumstances we are provided to help us achieve academic accomplishments,” he said, going on to list the academic achievements of numerous individuals, professors and departments.

Having an academic culture also means not being “utterly focused on academics with no focus on outside formation … ethically and personally,” Spieldenner said.

Extracurricular activities such as clubs and households help provide formation in these other areas, he said.

Senior David Hahn then came up to affirm the motion, arguing that, while Franciscan is better off than most other schools, it still is not truly excellent.

Hahn criticized “easy-A” classes that students can pass with little to no effort. “The university is not taking steps currently to make it harder to do that,” he said.

In a university culture consisting of academics, clubs, households and more, “the emphasis we give in our culture does not seem to be on academics.”

Finally, graduate Alex Denley gave the final opening speech in opposition to the motion. Denley argued that, fundamentally, at Franciscan there is a “common love and pursuit of truth.”

“There’s something about Franciscan that drew me into this culture,” he said.

Denley told stories of going to visit professors during their office hours to further discuss questions and issues raised in class, and he said that they were always happy to speak with him.

This “relation of the students and the faculty in this common pursuit of truth” is indeed excellent, Denley said.

The debate floor was then opened for speeches from audience members and both students and professors took the opportunity to join the discussion.

Classics professor Theodore Harwood, who holds a doctorate in classics with a concentration in ancient philosophy, tried to hone in on a definition of academic culture.

“Culture is a tendency or gravity toward certain behaviors,” he said. Teaching is not simply supplying students with information but “directing the eye of your soul toward some good.”

At the end of the night, attendees voted to affirm the motion, with 50% affirming, 41% opposing and 9% abstaining.

After the final vote, the three founders of the Veritas Society — Denley, senior Clement Harrold and senior Daniel McNichol, were recognized and congratulated for their four years of work putting on debates, seminars and more. A small reception outside of the J.C. Williams Center followed.