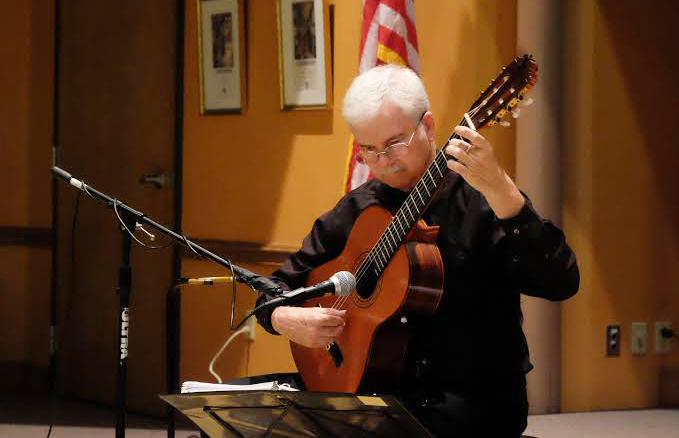 On Thursday night in the Gentile Gallery, guitarist Ronald Dubois performed a concert and lectured on the role of classical guitar and sacred music over the centuries.

Dubois began by discussing the role of sacred music in the Early Church, quoting Saint Paul in a letter to the Ephesians, “Speak to one another in songs, in hymns and spiritual songs, singing and making known with your hearts to the Lord.”

The purpose of sacred music is to move the faithful to glorify God, said Dubois, who ended the night by quoting Johann Bach, “The aim and final end of all music should be none other than the glory of God and the refreshment of the soul.”

Classical guitar is an extremely unique instrument requiring that the guitarist primarily uses the method of picking rather than strumming the strings. This method creates a calculated yet harmonious sound that resonated with the audience and captured their attention at Dubois’ recital.

Dubois’ performance of Silent Night left a profound impact on freshman Sandra Victoria, moving her to tears. After the performance she said, “I told myself I wasn’t going to cry but it was just amazing. It really made me appreciate the instrument.”

The classical guitar creates a peaceful, uplifting sound that does not distract from the sacred liturgy but allows for a deeper spiritual connection, which is why the Early Church allowed it in the liturgy, according to Dubois.

Freshman music major Sarah Fesalbon commented on the concert saying, “We were interested in how he incorporated sacred music into his art… I thought it was really beautiful.”

In addition to performing live songs, Dubois also displayed videos of himself in concert along with his son, guitarist Francis Dubois, and flutist Katie Shaffer.