Byzantine speaker uses icons to give insight into Lent 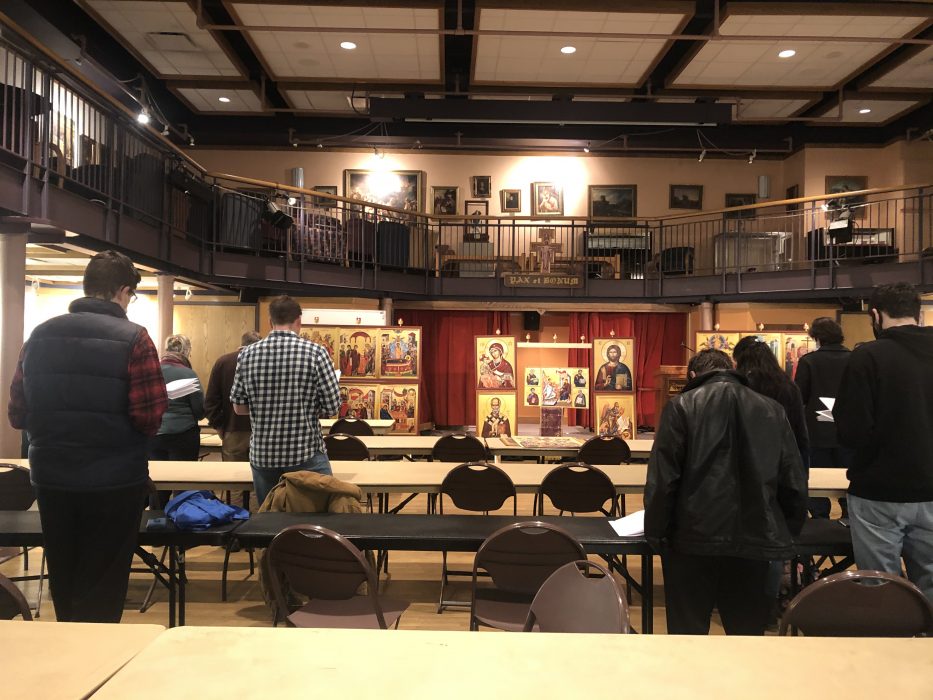 Monday evening, a visiting speaker addressed the liturgical transition into Lent in his talk “Windows into Heaven,” aided by the presentation of a collection of Byzantine icons.

The Rev. Timothy Ferris, a sub-deacon from the nearby Byzantine Catholic Seminary of Saints Cyril and Methodius, spoke in the Gentile Gallery at 6 p.m. He visited campus at the invitation of the Byzantine Club to give a talk and to lead the 25 people present in a series of prayers from the Byzantine liturgy.

A total of 17 large, ornate icons, depicting Christ, the Blessed Virgin Mary, the saints and scenes from the Bible, were mounted along the front of the room, along with small votive candles. A much larger collection of icons was laid across the front table for Ferris to refer to as he spoke.

Each brightly colored icon contained numerous symbols of the faith, and often depicted multiple scenes intended to tell a story.

“When we come into the church and are surrounded by the images of the saints and the glory of God, that’s where we find our rest,” said Ferris. “[The saints] have plotted out the course for us.”

As he addressed the theme of preparing to transition into what the Byzantine Church calls the “Great Fast” of Lent, Ferris touched on the theme of humanity’s fallen nature throughout the biblical story of salvation.

“All of humanity shares in the story of the Prodigal Son, all the way back to Adam and Eve,” he said.

Because of humanity’s fall, Ferris said, it is important to seek rest not in the world but in prayer.

During the second half of the evening, Ferris led the group in a set of prayers from the Byzantine rite called the Paraklesis, or the “Office of Consolation to the Most Holy Theotokos.”

The Paraklesis consisted of a series of psalms and prayers that were alternately sung and chanted. The chants asked for the prayers of the Blessed Mother with regard to a variety of subjects, from physical sickness to spiritual warfare.

The Greek word Theotokos, which translates literally as God-bearer, is a title of the Blessed Mother that comes from the earliest ages of the Church, Ferris said.

Junior Andrew Nichols, one of the attendees, said, “I have been to several Byzantine liturgies, so this wasn’t very new to me, but it was nice to see the icons and hear from the sub-deacon.”