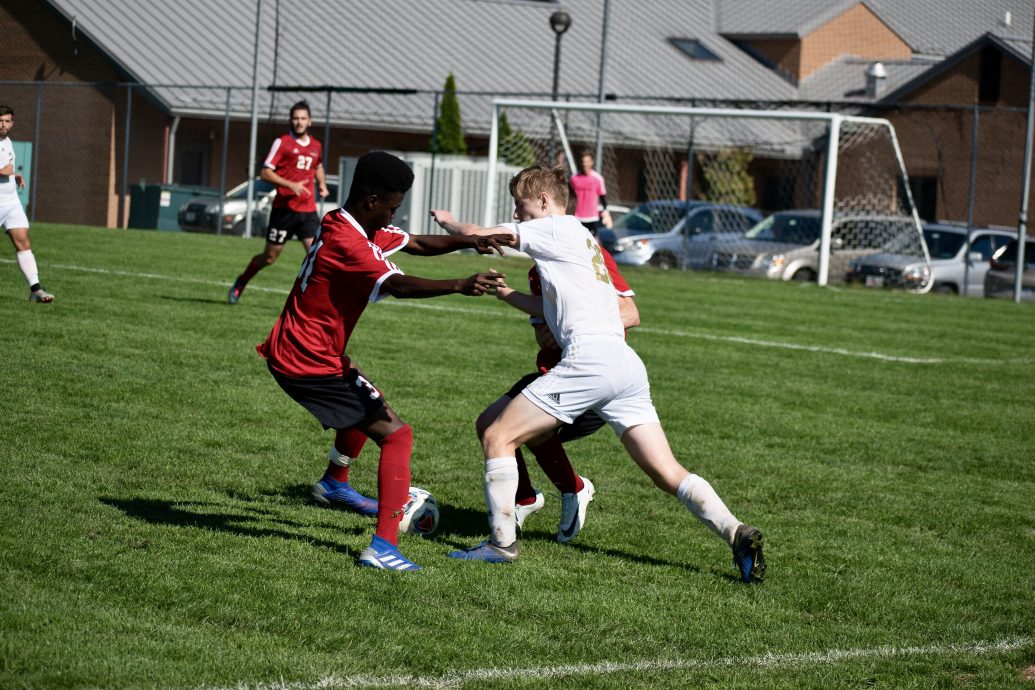 The Barons came out ready to play, and within the first few minutes, junior midfielder Sebastian Koehler attempted to cross the ball, but it was too deep, and the La Roche keeper tracked it down. Senior midfielder Ian Baldau followed soon after with an almost perfect shot, but it was unfortunately saved by the goalie.

With so many assaults against them, the La Roche players began to play more aggressively. Junior goalie Brian Gaughan made an amazing save, preventing the Red Hawks from gaining the upper hand. The match continued scoreless until La Roche scored off a corner kick with less than 17 minutes left in the first half. The Red Hawks scored again just minutes later off a shot from midfield, putting the Red Hawks ahead 2-0.

This did not discourage the Barons, who continued with their game plan. Sophomore defender Matt Kueflera headed the ball off a corner, but it was saved by the opposing keeper. Only a few minutes later the Barons began to close the gap with a goal by junior midfielder JP Bobak off of an assist from senior midfielder Mark Fioramonti.

The second half began as sophomore forward Mikey Irvin dribbled the ball downfield, then gave it to sophomore midfielder Joseph Fioramonti who netted the opportunity, bringing the score to a 2-2 tie. La Roche attempted to regain the lead by crossing the ball, but it was blocked by the Barons defense. The Barons gained the lead in the 54th minute as sophomore midfielder Nick Miller landed the perfect shot off a free kick, fueling the team with energy. This brought the score to 3-2.

With 20 minutes left, Bobak scored, following some nifty footwork around the defense and the goalie. Three minutes later, freshman forward Andrew James scored for the Barons off an assist from Miller.

The Barons refused to let up despite their lead and continued their attack against La Roche with many shots that were either saved or just wide of the goal. In the end, the Barons triumphed over La Roche with the ending score being 5-2.

Head coach Christian Bobak praised the team, saying, “We were down 2-0, but the way they responded — they didn’t lose their heads and just kept going. A lot of young guys stepped up which is awesome, very happy about that.”

The Barons eagerly await their next home game against the University of Pittsburgh at Greensburg Tuesday, Oct. 15 at 1 p.m.