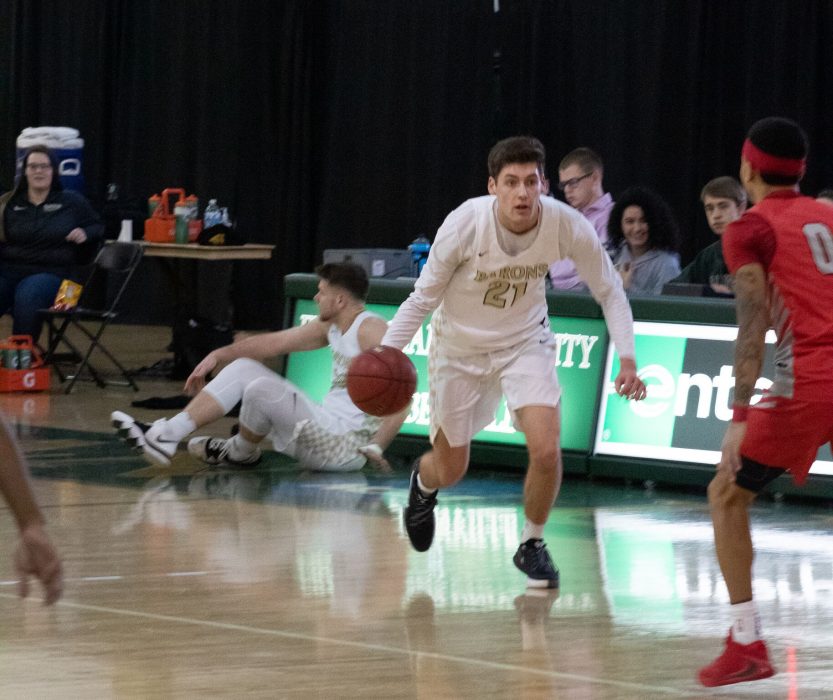 The Franciscan men’s basketball team made its senior night against D’Youville one to remember, beating the Spartans 90-78. Baron Athletics also honored those sports teams which have finished their seasons for the academic year.

The Barons and the Spartans entered the game in the bottom half of the AMCC standings, with the Barons ranked eighth and D’Youville ranked 10th in the conference.

The Barons hoped to avenge a previous loss, as D’Youville had won their meeting earlier in the season by a score of 94-87.

The game held a rough start for the Barons, and D’Youville was in the lead for most of the first half and even into the beginning of the second. But Franciscan always found ways to keep it close, often due to baskets by sophomore forward Travis Lien or blocks that stopped Spartan offensive efforts.

The beginning of the second half started much like the first, with D’Youville jumping out to a six-point lead. From there, though, the Barons got hot and began scoring quickly. The crowd roared as Lien passed behind his back for an assist and again when he put up the only dunk of the game.

“Travis, the sky’s the limit for him. He’s extremely talented, a very smart player and very athletic,” said head coach Joe Wallace. “It’s going to be really fun to watch him for the next two years.”

The other star of the game was senior center Matt Trent, who led the team in scoring with 21 points and was second on the team in rebounds with nine.

This game was particularly meaningful for the seven seniors on the team, who played their final game on Kuzma Court.

“Those guys have spent a lot of time in this gym and put a lot into this program,” said Wallace. “And to be able to close it out on senior night for them in their last game on this floor is really special for a lot of reasons, because they’ve raised this program to another level in the last four years, when we first got here.”

Halftime featured senior twirler Clarice Orteza, who made her final performance of her four years twirling for Franciscan basketball.

The rugby and cross-country teams were also honored for their accomplishment of reaching postseason play.

The Barons go on to play at Penn State Altoona on Feb. 17.