Barons basketball pounce on the Pittsburgh Panthers in crushing defeat 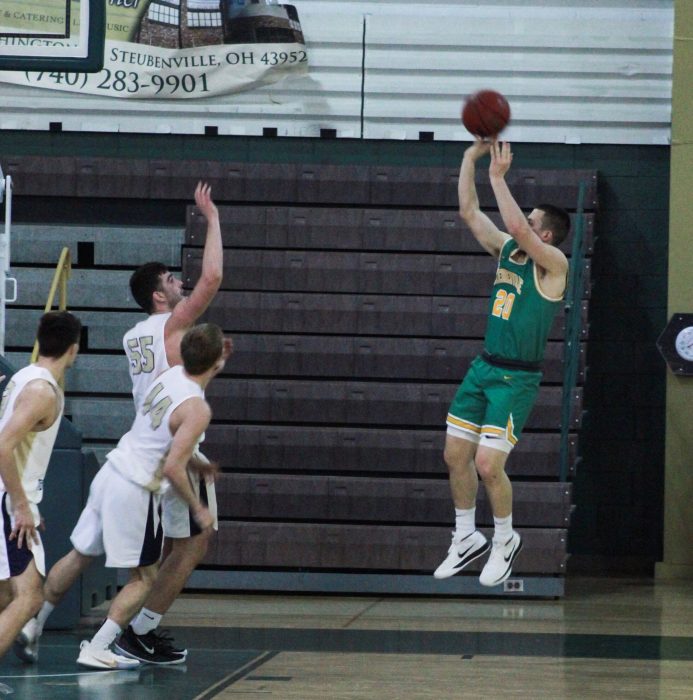 The Barons men’s basketball team played an intense and fast-paced game against the Pitt-Bradford Panthers this Saturday at 2 p.m., causing many turnovers and exciting plays and ending in a soaring win for the Barons.

The first part of the game was played with a good deal of turnovers, and at 15 minutes sophomore forward Travis Lien shot a 3-pointer before Pitt-Bradford called a full timeout. The Barons led at 12 with Pitt at 4.

At 14 minutes, junior guard Sean Hickey stole the ball and ran down the court for a layup, and sophomore guard Donnie Vandeborne scored seconds later.

The Barons played tough defense at 11 minutes; Pitt-Bradford was called for a travel, and senior center Matt Trent managed to block Pitt’s shot by knocking the ball out of the air.

Pitt-Bradford began to score more, but the Barons soon stopped the comeback, and at six minutes senior forward Joe Schriner shot a 3-pointer, bringing the score to 33-20, Franciscan still in the lead. At five minutes, Hickey took the ball down the court for a layup.

The first period ended with Franciscan in the lead at 40 and Pitt-Bradford at 29.

The halftime show had a baton twirler who entertained students by lighting her baton on fire.

The second period began with Trent handing off the ball to Lien, who shot a 3-pointer.

Franciscan continued to keep up the scoring, and at 16 minutes Schriner played offensive extremely well and scored.

Franciscan knocked a shot from the air at 10 minutes, making the student section of the crowd go wild. Pitt-Bradford then called a 30–second timeout, with the score at 60-45, Barons.

Trent came up from under the basket and scored, and at eight minutes Schriner scored another 3-pointer.

At six minutes, Pitt-Bradford called a full timeout, feeling the pressure building as the Barons pulled away with a 69-56 lead.

The game became even more heated as both teams continued scoring, and at three minutes the Barons made a pass that bounced off a Pitt-Bradford player’s shoe and off the court.

Barons called a 30–second timeout and led by five points at 75. At two minutes, Lien scored and the Barons shot one free throw.

With one minute left in the game, Franciscan led by 10 points at 80. At 40 seconds, Pitt-Bradford shot a free throw and then proceeded to net another basket.

At 20 seconds, the Barons at 83 still led by 10 points. With 10 seconds left in the game, the ball was passed to Lien, who then casually dunked it, pulling even farther ahead of Pitt-Bradford.

Pitt-Bradford scored once more before the time ran out but couldn’t keep Franciscan from winning the game 85-75.

“It’s always great to get a win on Kuzma Day,” said head coach Joe Wallace, “honoring Coach Kuzma and his family. I thought we did a really good job sharing the basketball, Joe Schriner did a good job of running the point and we had a really good and balanced attack today. I’m always happy to walk away with a win.”

The Barons celebrate Kuzma Day in honor of former head coach Hank Kuzma, after whom their home court is named. The Baron’s next game on Kuzma Court is this Wednesday at 6 p.m. against Penn State Altoona.