Baron lacrosse falls to Muskingum despite promising comeback in second half 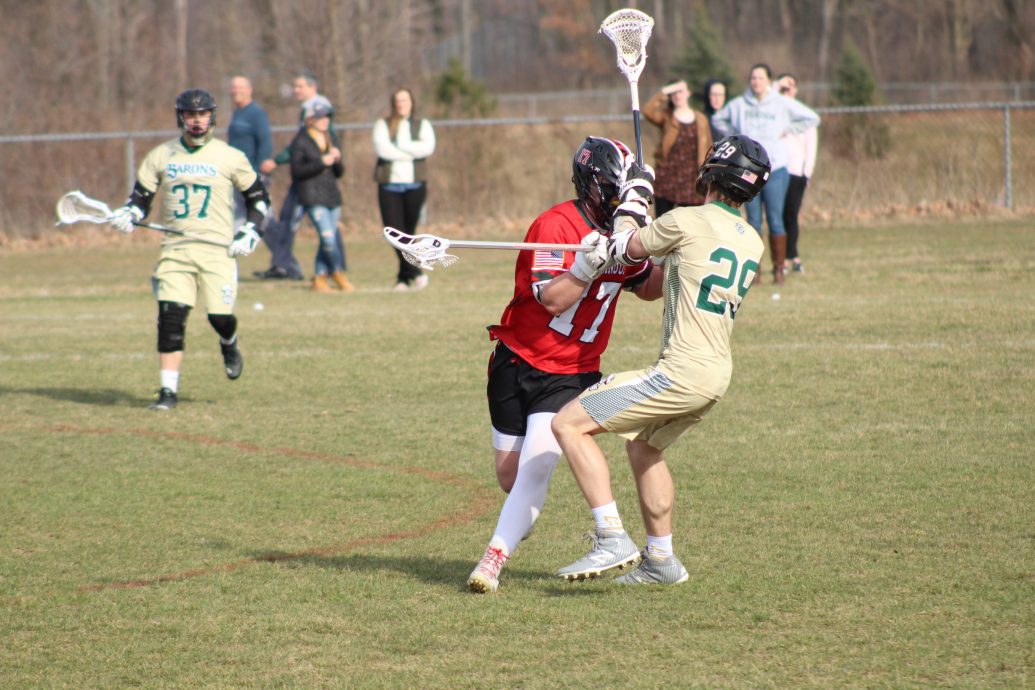 Franciscan University’s men’s lacrosse team fell to Muskingum University, 24-5, Wednesday afternoon after a 13-point deficit in the first half which left the Barons unable to recover.

The Barons had a relatively slow start, and the Muskies were quick to steal two points within the first two minutes of the game. In an attempt to come back from the early setback, senior midfield Danny McCartney took advantage of a ground ball and passed it to junior attack Michael Araps, who scored the first goal for Franciscan and his fifth goal of the season. Araps’ shot put the Barons on the scoreboard with 13:02 left in the first quarter.

The Barons were met with a difficult second quarter after Muskingum showed a dominating performance that led them to score 13 straight goals, giving them a comfortable 15-1 lead.

With 2:35 left before halftime, McCartney ended the Muskie’s streak with his 15th goal of the season. The Muskies got one more point past the Barons, making the score 16-2 at the half.

The Barons were off to a strong third quarter as Araps scored for the second time with 10:16 left in the quarter. The Muskies quickly halted the Barons’ comeback attempt, racking up another three points before the end of the third, making the score 20-3 going into the final 15 minutes of the game.

In a thrilling start to the fourth quarter, both teams scored within the first three minutes. Junior midfield Steve Smith scored his first goal of the day, followed only three minutes later by his second.

Although the Barons put forth a great effort, Muskingum refused to let up, taking back control of the field. The Muskies scored the final two goals of the game, stretching their lead to 19 points, resulting in a final score of 24-5.

Despite the loss, head coach Pete Rosaschi remained optimistic. “Our team worked very hard today and — despite the score — saw some things we liked and obviously a lot we did not like,” he said. “Due to the loss of several starters, the coaching staff is working to find the player personnel packages that will optimize our ability to compete.”

Franciscan will return to Memorial Field on Saturday, March 23, to take on Alfred State at 1 p.m.