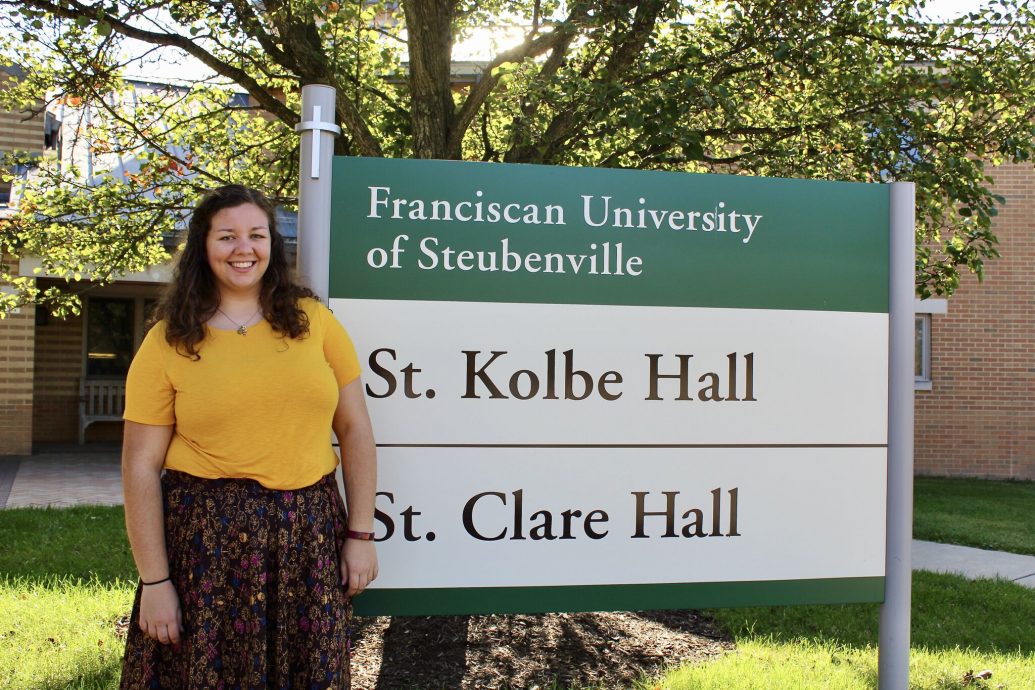 Franciscan University of Steubenville’s campus isn’t new to Serra Alongi, the new resident director of Sts. Kolbe and Clare Hall. Having lived on campus for four years as a student, she’s back to help current students celebrate their joys and learn from their struggles.

Alongi is originally from Weirton, West Virginia, and grew up there as a child. She played a great deal of softball growing up and played for Franciscan University’s softball team for a year.

She graduated from Franciscan in 2017 with a degree in middle school education, concentrating in language arts and social studies. After graduation, Alongi went to the Diocese of Wheeling-Charleston in West Virginia and worked for the office of youth and young adult campus ministry.

“I was kind of like a paid missionary basically,” said Alongi. “We traveled the States to do retreat ministry and different programs as well, like running camp at our summer camp property.”

Alongi talked about how her new job as resident director helps her to fulfill her gifts better.

“Last year, I was praying about what the Lord wanted me to do (and) was kind of feeling like my last job wasn’t using my gifts to their fullest potential,” said Alongi. “I was praying a lot for a job that would help me to do long–term ministry, whereas my last job was retreat ministry. So, you’re there for a day or a week; then you’re out. And that’s just not where my gifts lie; they’re in developing relationships with people.”

When Alongi found out that the position as resident director was open, she was excited about applying. She was even more excited, however, when she found out she had got the job, even though she had never lived in Sts. Kolbe and Clare Hall before.

“I’m super happy to have the opportunity to be here,” said Alongi, “and it’s been super great. I feel very welcomed by all of the households and all the residents, and it’s a really fun community here.”

Alongi said that she really likes her new position and that it has helped her grow in boldness.

Much of Alongi’s job has been getting to know residents and students on campus, helping them with their struggles as well as helping them to grow as people. Alongi said that one of her goals was to help the residents in Kolbe-Clare Hall “be better people and especially better Christians as they grow here.”

Alongi tends to be a people person. “I’m super extroverted,” she said, so she enjoys many hobbies that she can do with other people. Alongi is also involved with the Missions of Peace and is the advisor for the North Dakota mission this year.

She wants her residents to know that, “I’m here and not a scary person who’s just here to write you up. Like I said before, I just want to get to know people and hang out with people!”

Alongi is happy with her new position and excited to get involved with campus life, even though she said, “(I’m) still trying to find my place.”

As she takes on all the joys and challenges of her new role, Alongi is sure to share her gifts and friendly attitude with her residents in the year to come.