Author lifts the veil to secrets of Eucharist 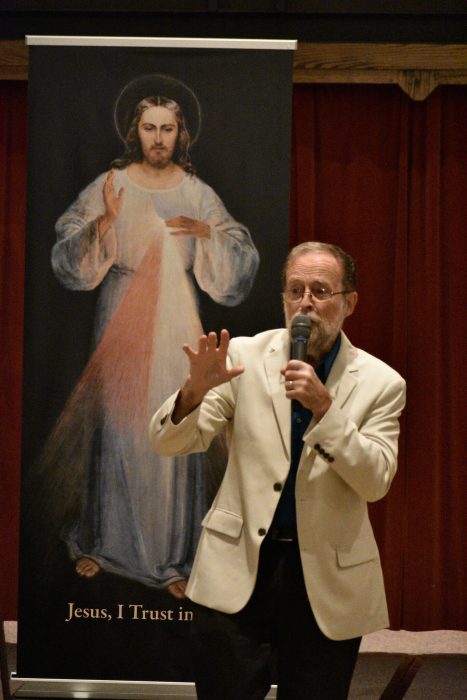 A guest speaker uncovered little-known secrets of the Eucharist for an audience in the Gentile Gallery Thursday, Oct. 10.

“They’re not really secrets, but they might as well be,” said Vinny Flynn, author of the book “Sevens Secrets of the Eucharist.” His talk, similar to his book, unveiled seven secrets for having a stronger appreciation for the Eucharist.

The Eucharist is not dead — it is very much alive, Flynn said for his first “secret.” He said the Trinity is one God, three persons and emphasized that each person of the Trinity has a personality and wants a one-on-one relationship with each individual.

Christ is not alone when you receive him, Flynn next explained; Jesus is present the way he is in heaven, without leaving heaven. Flynn said all of heaven and everyone in it is present in the Eucharist, therefore making every Mass a heaven on earth.

“That’s why it’s called the communion of saints. It’s a pun,” Flynn said.

For his next point, Flynn said Jesus only sacrificed himself once, and every time the faithful participate in Mass, they partake in the precise moment of that sacrifice. He then said the word “receive” has become a dead word and has lost its meaning. Instead of only saying we receive the Eucharist, we must remember that it is a chance to “enter into communion,” Flynn said.

Flynn next explained that how each person prepares to focus for Mass will determine how he or she will receive. “Every reception is different,” said Flynn, “and I get to choose how it’s going to be different. … I can choose to make today’s reception more complete than yesterday’s.”

Flynn said there is no limit to the number of times a person can receive because he or she can receive spiritually countless times. He then said human bodies were created in a way to reflect Christ’s form. “You’re here because he wanted more family. … We are the heirs of what Christ has by right,” he said.

The night closed with a holy hour and praise and worship in Christ the King Chapel.

Some students were surprised by the night’s talk. Freshman Faith Scott said, “I wish I knew this stuff sooner.”

“All of his points were really shocking. It all made sense once he said it, but a lot of it is stuff you don’t really think about,” said freshman Jesse Iamarino.

The talk was hosted by Students for Life and Corpus Christi household.