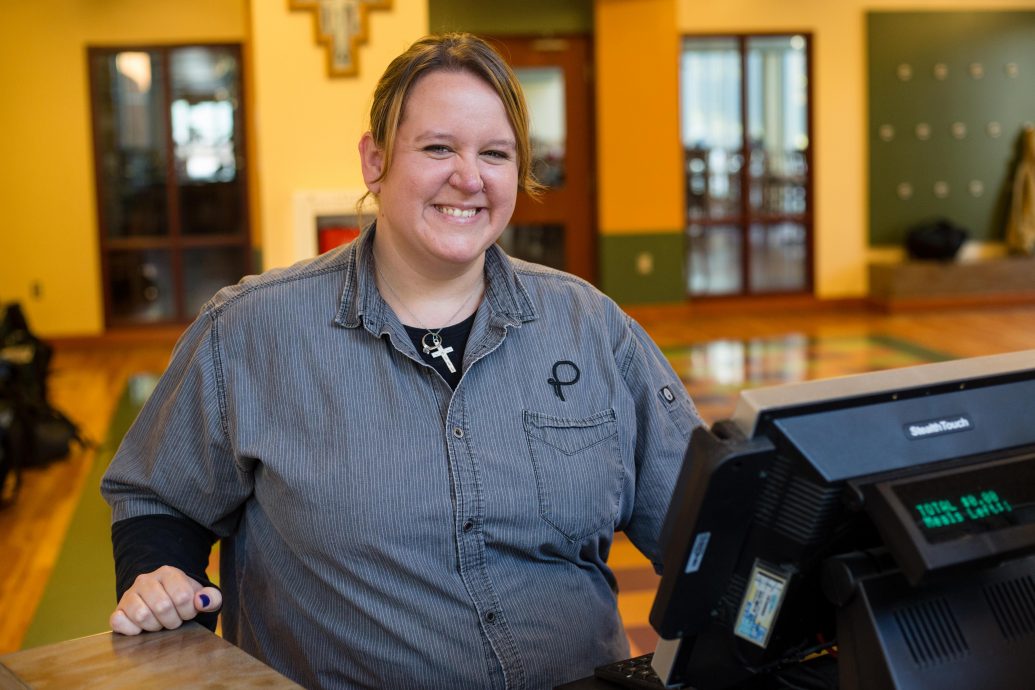 If you’re missing the sun during these wintry days, don’t go looking for it in the Ohio sky. Get yourself over to the Antonian Hall cafeteria and find it shining in Ronda McGinnis’ smile.

McGinnis is the cashier at Antonian Hall for breakfast and lunch during the weekdays, but she does so much more for this campus than just swiping students’ cards. Her genuine friendliness and hospitality makes campus just that much more of a home.

Oct. 31 will be the one-year anniversary of McGinnis’ time at Franciscan University of Steubenville. Over the past year, she has spent every weekday cheerfully brightening campus by greeting every student with a “Hey, how ya doing?”

McGinnis said of her first day here, “I saw somebody walking around in a horse head costume, it was like, wow, this is surreal! Welcome to Franciscan!”

Normally a little introverted, McGinnis said that a whole different side of herself comes out with the students here.

But there’s more to McGinnis than her cheerful greetings. Students probably have more in common with her than they might think.

McGinnis grew up in Steubenville and now lives here with her fiancé, her 11-year-old daughter and their three cats and three dogs.

She enjoys cooking with her family, especially homemade spaghetti sauce. “I do enjoy cooking, I just don’t like to cook for a crowd,” she said, having left her former job cooking for a nursing home prior to joining the Franciscan University family.

What she really loves is the pride that comes with making a delicious meal, she said, “When everybody’s like, ‘Oh I’m so full!’ and you’re like ‘I made that!’”

McGinnis is also an avid collector – she has close to 200 Pop! Funko figures of characters from her favorite movies and shows, such as “Stranger Things” and “Doctor Who.” She also collects board games, Stephen King novels and vinyl records.

Her record collection includes such classics as The Beatles, The Doors, Pink Floyd and Led Zeppelin. Her record player is connected to surround sound, she said, “so putting on ‘Dark Side of the Moon’ with it cranked all the way up – one of the most fantastic things ever. I just lay on the floor and listen to records.”

If you like board games, you can also catch her at Board Game Club on Friday nights in the St. Leo room of the J.C. Williams Center. She and her daughter like to play games with the college students who come, and they play something different every time, from “Settlers of Catan” to “Unstable Unicorns.”

Be warned – her favorite board game is “Clue” and she doesn’t pull any punches. “My fiancé won’t play with me because he thinks I cheat, but I’m just good. I’ve been reading murder mysteries since I was seven years old, so I’m in tune to that,” she said.

“I’m a big dork,” McGinnis said with a laugh. “You want to talk to me about your nerdy hobbies? I probably have that nerdy hobby too, so don’t be afraid to talk to me. I’ll talk about anything.”

McGinnis said she truly enjoys connecting with the students as they come into Antonian Hall. She likes to hear their stories and find little ways to remember them. She even said she knows most students’ names, so no one should feel too shy to strike up a conversation.

“I enjoy my job. I get to sit down and harass college students all day. I mean, what’s not to like?” she said.

So whether your morning is rainy, cold or just muddled by the Steubenville fog, get to know McGinnis’ welcoming smile and genuine heart, and she’ll bring back the sun.