A look into the life, ministry of Bishop Jeffrey Monforton 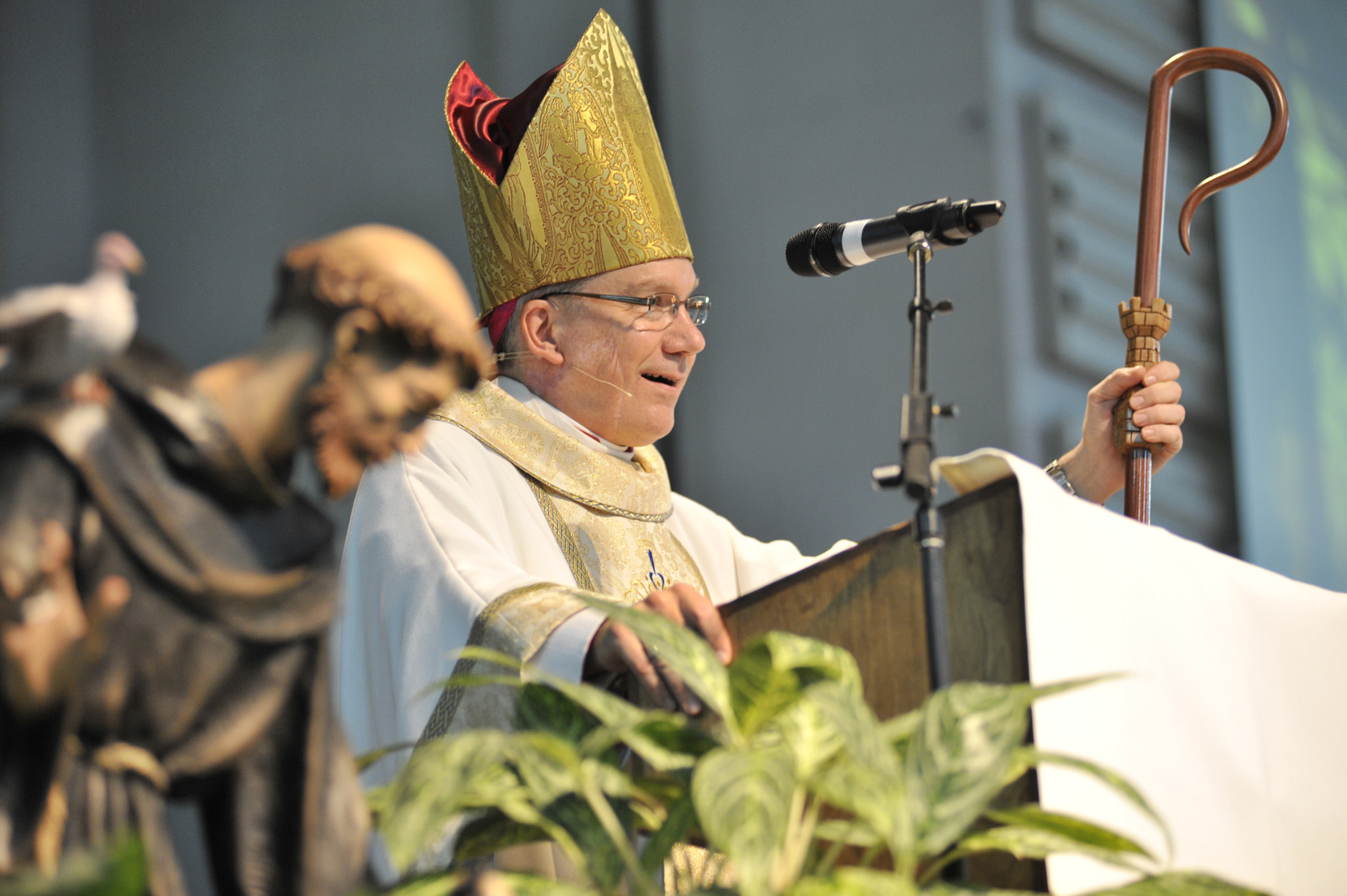 As the shepherd of the Diocese of Steubenville, Bishop Jeffrey Monforton leads a busy life embracing the missionary call of Jesus to minister to both Catholics and non-Catholics with a contagious joy.

Part of his mission includes teaching Christian moral principles every Tuesday night during the fall semester at Franciscan University. On top of that, he shepherds 57 parishes that spread out over 5,900 miles.

“When it comes to the contemporary challenges of our day, it adds additional emphasis (for the students) to hear from the bishop himself. I’m not simply equipping Catholics; I’m equipping apologists,” said Monforton.

Monforton grew up in Detroit and went to college at Wayne State University, but when he was 22 years old, he accepted the call to the priesthood and transferred to the seminary.

“I grew up in a solid Catholic household, so family was instrumental,” said Monforton. “I did entertain the thought of priesthood after I graduated from high school. I had visited the seminary; it just didn’t seem right. Four years later, I returned.”

He spent three years at Sacred Heart Major Seminary in Detroit and five years at the Pontifical North American College in Rome, Italy. He is now on the NAC’s Board of Governors.

He was ordained in 1994 by Cardinal Adam Maida, who was archbishop of Detroit at the time. Monforton later would spend seven years as Maida’s personal secretary.

His first assignment was at the National Shrine of the Little Flower, where he served as an associate pastor and taught religion and Christian morality at the parish high school, a preface to his teaching at Franciscan. St. Therese the Little Flower has followed him in his ministry ever since.

Other saints with a profound impact in his life include St. Christopher, his confirmation saint and patron of traveling, appropriate for Monforton who loves to travel, taking regular trips to Rome and averaging 36,000 miles on his car pedometer every year, traveling throughout the diocese of Steubenville.

He recently traveled to Florida to visit his brother, who took him to see a movie at a movie theater and putt-putt golfing, neither of which he had done in more than 10 years. He also rode a roller coaster for the first time in more than 20 years.

“When I was growing up, I loved roller coasters,” said Monforton. “But I learned that at 52 years old, the body doesn’t react the same way it used to. I went four times to four different roller coasters. The first one was the first roller coaster I ever rode that hangs off the track. So it’s a whole different world. I loved it.”

His travels have taken him to Poland where he obtained a vial of Pope St. John Paul II’s blood, another one of his patron saints. He plans to have that first class relic be incorporated into the main altar of the diocesan cathedral.

“Don’t ask me if claimed when I went through customs,” he said.

He had the opportunity to greet Pope St. John Paul II numerous times and attended the saint’s funeral. He worked in Vatican City during the conclave that elected Pope Benedict XVI. He saw Pope Francis in Washington, D.C., and Philadelphia, and he greeted the pope in Rome a few short days after he and a number of other bishops attended the canonization of Pope John XXIII and Pope John Paul II.

Monforton said, “One of the bishops there leaned over to another bishop and you could hear him say in what I think was Italian … ‘We have 700 bishops here, maybe we could have a council.’ And another bishop yelled out ‘Don’t you even entertain the thought!’”

He was ordained the bishop of Steubenville in 2012. He had heard about Franciscan and knew it was in the diocese but quickly became a friend of the university. He talked to Franciscan’s president, the Rev. Sean Sheridan, TOR, who encouraged him to teach a class.

Monforton is thankful for Franciscan, calling it a “profound blessing” to his ministry. He recognized that Franciscan trains future catechists and it is his responsibility to make certain that they are trained appropriately and accordingly to the faith.

Many bishops have in fact thanked Monforton for training their catechetical coordinators.

“I can’t take credit,” said Monforton, “We all know the tremendous zeal that the Franciscan community possesses, how can it not be contagious in the diocese as well as throughout the country?”