70 years: A brief history of excellence 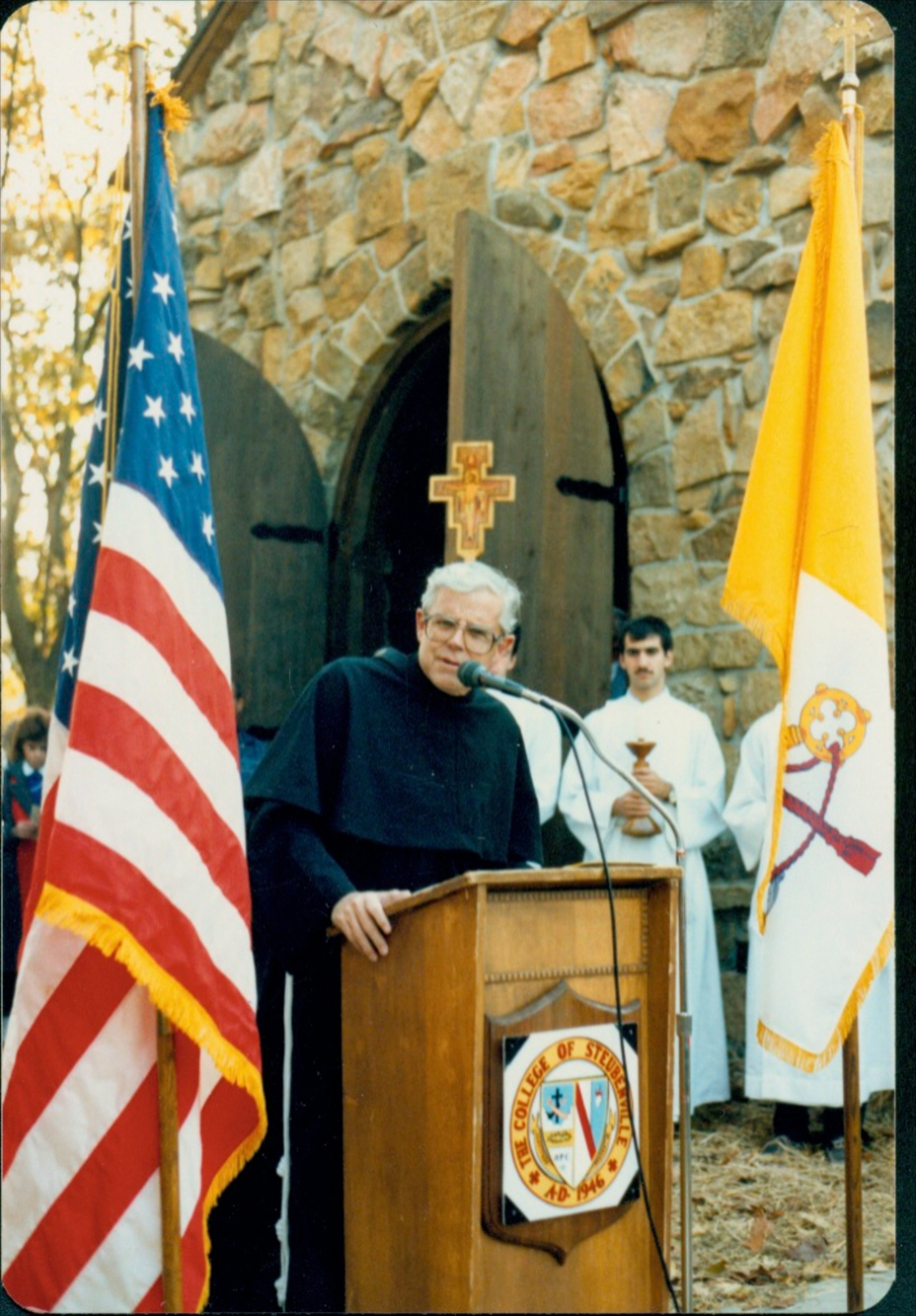 After 70 years of excellence, Franciscan University of Steubenville still keeps the spiritual and academic growth of its students as the most important element of its mission.

The university has grown from being a small college in downtown student attended by mostly veterans of the recent World War II to being ranked in 2014 in Forbes’ magazine on its list of America’s Top Colleges, Franciscan University has traveled a long way from where it began, but has always kept its students as the focal point of its mission.

The book, “Faith and Reason: An Illustrated History of Franciscan University of Steubenville,” said the Rev. John King Mussio, bishop of Steubenville, had a vision of building a college in the industrial town along the Ohio river, but he wanted it to be founded on Catholic values. After a failed attempt with the Jesuits, Mussio turned to the Third Order Regular (TOR) Franciscan order, which had already established a very successful St. Francis University in Lorreto, Pennsylvania.

According to “Faith and Reason,” the Rev. Daniel Egan, TOR, assisted by the Rev. Regis Stafford, TOR, came to Steubenville in 1946 to start the college in downtown Steubenville.  Mussio had secured the purchase of several buildings which were located sporadically around eight blocks of the city.

Known as the “College of Steubenville,” the college opened on Dec. 10, 1946, with the ceremony celebrated with a Solemn High Mass at the Immaculate Heart of Mary Chapel in Steubenville.

The first class of students was a total of 258, according to the illustrated history, eight of whom were women, and the rest mostly World War II veterans who had not yet received their college education.

The students and friars lived frugally getting most of the textbooks through donations.

In 1959, according to “Faith and Reason: An Illustrated History of Franciscan University of Steubenville,” under Egan and helped by Michael Starvaggi, an Italian immigrant and leading industrialist, the university was able to purchase 40 acres of hilltop land overlooking the Ohio River, which then led to the ground breaking for six new buildings.

The Rev. Kevin Keelan, TOR, succeeded Egan as president after his death, and continued with the first part of construction for the campus. With the help of donations, the school began to build, starting with six buildings, one of which was named for Egan, and a wing was named for Stafford.

Struggles for the university

Said the history of the university, although the school was expanding on the hilltop, the college attendance, which had been up in the hundreds, began declining. The Vietnam War and other colleges opening in Steubenville caused a decline, as well as students shying away from a Catholic education.

The decline slowly became worse, leading to only six students and eight faculty members attending the opening Mass for the semester in 1973.

With the decline, many of the dormitory rooms were empty, and it led to them shutting down St. Thomas More Hall and placing a sales sign out front, said the guide.

The school was in dire need of a renewal.

In 1964, according to the guide, a young Franciscan friar was sent to be the dean of the College of Steubenville. The Rev. Michael Scanlan, TOR, soon realized that the problem did not lie in the academics at the school, but rather the spirituality of the students on campus.

The first three months he was at school, Scanlan ate his meals with the students, he played sports with them, and attended every party, learning very quickly that the issue lied within the student body itself.

Many of the students were in the party scene, and many lived lives of isolation. Another issue arose with students who wished for a later Mass time on Sunday, since many were exhausted from their late Saturday nights.

At an all-campus meeting, Scanlan announced that he would not change the Mass times, nor abolish the curfew, which had also been requested. Rather, he said he would celebrate the Sunday Mass himself, and he was also initiating what he called “households” on campus.

Scanlan established households in a way for students to get to know each other better, and to grow in a community together. Not long after they were established, it became mandatory that every student be involved with household, according to “Faith and Reason: An Illustrated History of Franciscan University of Steubenville.”

Households prayed, ate, played sports and went to Mass together. Slowly the students became deeper rooted in their faith.

Since that day, it continued, over 1,000 students are involved in over 40 households, showing the fruit of Scanlan’s idea.

According to “Faith and Reason: An Illustrated History of Franciscan University of Steubenville,” not long after this first step, Scanlan invited the Catholic Charismatic Renewal Movement to settle in Steubenville and bring life to the campus through the Christian Renewal Center. The Charismatic group in turn, asked if the university could host their first priest conference, which took place in 1975, and was attended by 500 priests.

The Defending the Faith conference and the St. John Bosco Catechetical Conference were added not long after that, according to the guide.

Forty years ago, in the summer of 1976, the first youth conference was held. One thousand youth attended the conference, which led to the college expanding to four youth conferences: three for high school students, and one for young adults.

Even then, as it is today, students felt drawn to the campus after attending the conferences, which helped the campus attendance to rise again, said the guide.

The school’s illustrated history, at this point, even though the spiritual renewal was growing, the campus was still in danger. Scanlan began to shift gears, not forgetting the spirituality, but focusing on establishing more programs on campus.

Highlights of the years included the appearance of Mother Teresa of Calcutta at the commencement ceremony, and her receiving the Poverello award in 1976.

In 1985, the Board of Trustees decided to change the name of the university to Franciscan University of Steubenville.

Another highlight included the addition of the bachelor’s degree in Theology.

Under Scanlan, according to “Faith and Reason: An Illustrated History of Franciscan University of Steubenville,”with the help of the Rev. Francis Martin and Dr. Alan Schreck, the Theology department grew.

Much to everyone’s surprise, said the history, the theology program became, and continues to be, the largest academic program at the university, hosting many prominent professors. It soon became a requirement for all students to take some courses in theology.

Walter Hildebrand, an Austrian architect, purchased the 14-century Carthusian monastery in 1983, which was in shambles due to occupation by the Soviet Union after World War II, according to the guide.

The full name was the Kartuase Maria Thronus Iesu, which means “Monastery of Our Lady, Throne of Jesus,” and it would soon turn into a small college campus for American students from the university to spend a semester studying abroad.

Although renovation was not yet finished in 1991, the first group of students spent their study abroad semester in the “Kartuase,” as it is affectionately known by the students.

Still in the renovating stage, many rooms were still in shambles, and the students had to wash their clothes in large tubs.

Several programs were begun through the university, which included the Language and Catechetical Institute (LCI) to help train students from eastern Europe in catechetics, as well as the International Theological Institute for Studies on Marriage and the Family (ITI).

Christ the King Chapel and the Portiuncula

Known for its notorious shape, Christ the King Chapel, which would someday be a beacon for the school, was dedicated in 1969 under the presidency of the Rev. Columba Devlin, TOR, according to “Faith and Reason: An Illustrated History of Franciscan University of Steubenville.”

In 1987, St. Mary of the Angels, a replica of the Portiuncula built by St. Francis of Assisi, was built. The “Port” was an inspiration of the Rev. Sam Tiesi, TOR, who had raised the money for it, and had drafted the plans.

The Portiuncula flourished with perpetual adoration of the Eucharist, and many students participate in it. Scanlan said the most important aspect of the college is its spirituality.

Scanlan said, according to the guide, “If Catholic universities do not produce the future priests, sisters and brothers, the loyal and scholarly Catholic theologians and philosophers, the Catholic business and professional people taking the high road of moral behavior, and the Catholic parents of the succeeding generation’s Church leaders, who will?”

Although a small school, Egan encouraged the building up of sports, choosing the name “Barons,” in honor of Baron von Steuben, for whom the city was named, according to “Faith and Reason: An Illustrated History of Franciscan University of Steubenville.”

Although the football team didn’t last due to expenses, the basketball team flourished under coach Hank Kuzma, who lead the team to a record of 24-1, and was named the Number One Small College Basketball Team in the United States.

The sports comes in two forms of intramural and club sports now, according to the history.

Under the presidency of the Rev. Terence Henry, TOR in 2007, the Barons re-entered intercollegiate sports, and became NCAA Division III.

What began in 1985 and is now known as the Priestly Discernment Program was established to help cultivate young men discerning the priesthood by giving them a spiritual community that will help them grow in their faith and prepare themselves through extra prayer time, as well as college courses, to go into a major seminary or religious life, according to “Faith and Reason: An Illustrated History of Franciscan University of Steubenville,”

According to the history, when Scanlan stepped down in 1999, he had left a legacy. The campus that had been crumbling both physically and spirituality was vibrant now. Under the presidency of the Rev. Terence Henry, TOR, it nearly doubled in size. The college also established new buildings, such as Ss. Louis and Elizabeth residence hall, and new academic majors, including catechetics and sacred music. Henry also introduced the Veritas Center for Ethics in Public Life, the Engineering Dual-Degree program, and the expansion of online learning.

Under the now president, the Rev. Sean Sheridan, the college continues to grow, sending students out into the world equipped both academically and spiritually.

The history of our school only helps in living up to the university’s motto: “Academically excellent, and passionately Catholic.”

The school marked it’s 70th anniversary this year with a reconsecration novena to the Sacred and Immaculate Heart of Mary.